Live music, art and creative activities are a central part of life in Newtown. Musicians, artists, performers and writers were drawn to the area, and Aboriginal and Torres Strait Islander people were are a key part of these creative communities.

Bart Willoughby, well-known for writing the classic anthem ‘We have Survived’ recorded with No Fixed Address, also wrote a song called ‘Newtown Dreaming’, with Murray Cook which was recorded with Mixed Relations. Mixed Relations formed in Darwin, in 1988, but Bart and Murray joined later in Sydney. Their tracks ‘Take It or Leave It’ and ‘Aboriginal Woman’, proved so popular that the latter made it into the Triple J Hot 100 in 1993. They also toured with UB40, Public Enemy and many other acts. The song ‘Newtown Dreaming’ (discussed previously) appeared on their CD ‘Love’ released on independent record label Red Eye Records in 1993.[102]

Other performers who have written songs inspired by Newtown and Erskineville include Glenn Skuthorpe, an Aboriginal singer from Goodooga, NSW, who moved to Sydney. He has performed at festivals in Canberra, Woodford and Newtown.[103]

Christine Anu, from the Torres Strait is known widely for her performances in shows, such as the Sapphires, and her own songs as well also lived in Newtown. She made the Warumpi band song ‘My Island Home’ into something of an anthem.

Ebony Williams, a hip-hop artist of Wiradjuri and African- American background lived in Newtown in the late 1990s.[104]

1998 Young Citizen of the Year, Gene Kellaher, was a student at Newtown School of Performing Arts. He featured in the opening ceremony of the Festival of the Dreaming at Sydney Opera House’s forecourt. [105]

Actors in major musicals have also lived in the area, including Amanda Davies, an actor, singer and performer of Wiradjuri background born in Yass, NSW, who lived in Newtown in 2000. She was cast in Fame: the musical.[106]

Alan Beale, a Wiradjuri man, ran Lillipilli restaurant on King St in Newtown, which featured Aboriginal ingredients and foods.[107] Some of his dishes included minced possum char grilled on skewers with a satay sauce, stingray flaps served with bunya bunya nut pesto and pigeon baked in clay. Warrigal greens and lemon myrtle, as well as of prawns and duck flavoured with native herbs, nuts and fruits are served too. Most of Beale’s customers are from overseas. Aboriginal people and rural Australians who have already tried and liked Indigenous foods also supported the restaurant.[108]

Some seasonal foods, which Beale served, can only be sourced at certain times of year and from particular areas, such as witchetty grubs from South Coast Aboriginal communities in late winter. Beale thinks Sydney diners suffer from a “lack of awareness” about Aboriginal foods and flavours.[109] 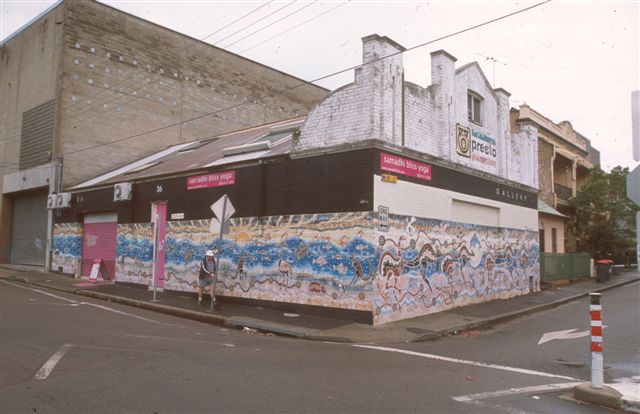 The King St mural featuring Martin Luther King, with the land rights flag added underneath is a recognisable art feature of Newtown. The image can be seen as a further affirmation of Aboriginal identity and the struggle for human rights, in the middle of urban street with few other obvious signs of recognition of Aboriginal people. Patricia Baillie shows a more contemporary aspect of daily life in Newtown in her photographs of Aboriginal women at the Newtown Railway Bridge area in 2009.