In this year of the Built Environment (2004) it is gratifying to know that the Sydney suburb of Newtown still has many late 19th century public buildings intact. One, however, is no longer in use, but its prominence on north King Street, its ornate facade and sheer size continue to attract the interest of passers-by and residents alike. 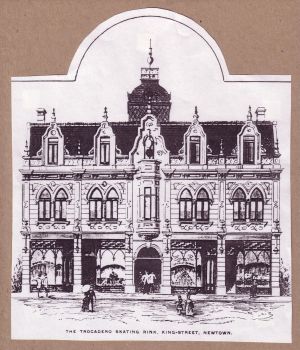 On Tuesday 2 April 1889 The Sydney Morning Herald advertised the opening, on the following Friday, of the TROCADERO AND ACADEMIE DE MUSIQUE in King Street, Newtown. A detailed report in the same newspaper on the Friday supported a claim that this establishment was the finest roller skating rink in the colony … a new pleasure resort which faces the Kettle Estate in Newtown’s main road … named after a popular Parisian place of entertainment … outside business premises [four shops], skating rink, billiard saloon, club rooms, baths, hairdressing saloons, café Francaise and oyster saloons … frontage measures 60ft with a depth of 200ft … the imposing style of architecture [is] a combination of Gothic and Renaissance, with enriched Mansard roof, surmounted by a tower … the main hall is an arched entrance with pilasters, ceilings and a tiled floor, in the centre of which is a fountain … staircases of white pine with carved cedar embellishments, lead to the salooons fitted for ladies’ and gentlemen’s hairdressing. Close to these are 12 bathrooms … all being supplied with hot and cold water, and elaborated with porcelain fittings. On the first floor is a lofty and tastefully decorated billiard-room containing two tables. Above the billiard-room is the clubroom, another well-furnished apartment, containing a piano, lounges, and conveniences for a future library. The continuation of the main entrance hall is a vestibule, flanking which on both

sides are refreshment rooms, cloakrooms, lavatories, skaterooms, and offices. Leading from the vestibule are two flights of staris connecting with the gallery of the main hall … the floor [is] free from column or impediment of any kind. The roof is of corrugated iron, in one span, light and elegant, so constructed as to admit of being opened the full length of the hall by the turning of a crank. The interior decorations consist of a series of pilasters and arches, the panels of which are fitted in with mirrors, on the sides of which are brackets for either natural or artificial floral ornamentation. Beneath this main hall is a café … in the centre of which is a fountain … Mr Frederick Ferrier is the proprietor … the whole structure is lighted by electricity …the general manager is Mr George Oughton … The formal opening took place yesterday afternoon, when about 70 invited guests were entertained at a cold collation … Last night the main hall was thrown open for skating for several hours, and at a later period a ball … Throughout the day choice musical selections were rendered by the Trocadero orchestra, under the direction of Mons A Hermes. 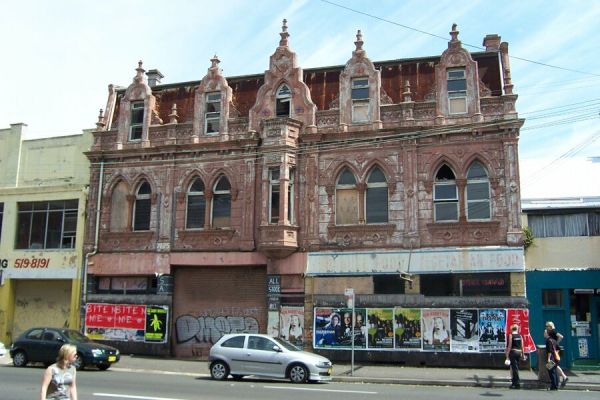 The Trocadero Palace in Paris. 19th Century. The inspiration for the naming of Newtown’s Trocadero.

For unknown reasons the grandiloquent sobriquet Academie de Musique was dropped from advertising almost immediately – perhaps one title of French derivation was enough for this intriguing suburban building which has survived for almost 115 years, more by neglect than by design.

Mr Ferrier, who was already well-known as the host of the Masonic Hotel in York St, Sydney, built the rink on lots 1 and 2 and parts of lots 3 and 4 of the Camperdown Estate which had been subdivided in 1841 but not built on except for a brick terrace on lot 3. Most interestingly from a heritage point of view about two-thirds of this house were, according to conservation studies of 1985 and 1995, incorporated into the fabric of the Trocadero. The Trocadero, which incorporates the street numbers 69 to 77, is a rare example of a Victorian Flemish style commercial building with free style Gothic detailing. It contributes greatly to the nineteenth century streetscape of King Street, especially the northern end, since it is one of the most elaborate facades in the street. The highly ornamented style represented popular taste of the time and was typical of the boom period which witnessed erection in the city of the General Post Office in 1886, the Lands Department Building in Bridge Street 1876-1890, the Sydney Town Hall 1886-1888, the Queen Victoria Building 1873-1898, and, in Newtown, the St Georges Hall 1887. All these structures exhibited technical and artistic developments that were the fruits of two International Exhibitions in Sydney in 1879 and Melbourne 1880.

The Trocadero as it now is, forlorn and neglected. Photo by Graeme Nichols, June 2001 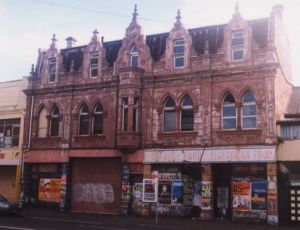 The Newtown Trocadero is a three storied building at the front and linked to a large hall bordering on Campbell Street at the rear. The facade is of rendered brick. Five bays are arranged symmetrically along the front with an oriel window at first floor level. The entrance has been altered by removing part of the western pier and the second western shop, where the opening now incorporates a roller shutter and a doorway to what was more recently residential accommodation on upper levels.

First floor windows are gothic. On the second floor elaborate Flemish style gabled dormer windows project from the mansard roof above a parapet. Three shop fronts remain; the first western one is of more recent 20th century design, but the two eastern shops are original with fine timber framing and large areas of glass with entry doors set back in the facade, as was typical of the period. At the rear of the easternmost shop is the substantial remaining part of the forementioned earlier terrace which still shares its roof with its pair on the neighbouring allotment.

In the last few years all occuption has ceased and a hoarding has been erected.

External walls of the hall are of face brick construction with semicircular arched window openings; other square or rectangular windows are of more recent origin. 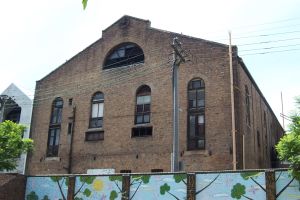 The rear elevation to Campbell Street is symmetrical in arrangement. There is evidence of a covered verandah having been removed from the rink level of this elevation, accessed by arched doors. Remains of the mechanism to open the clerestory roof can be seen at the apex.

Interior view of the Trocadero showing details of the roof structure looking toward King Street. Taken by R. Thorne. 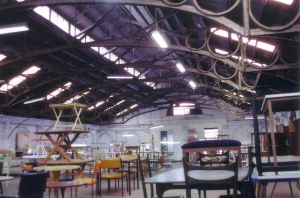 Behind the current shutter on King St the vestibule leading into the hall retains a clerestory roof and window structure. There is evidence of stairs on east and west walls to a now-removed landing and doorways. That level also gave access to the hall gallery. The hall has a timber floor and iron roof.

Truss elevation of the Trocadero roof. Courtsey of Audio-visual Library, Faculty of Architecture – University of Sydney. 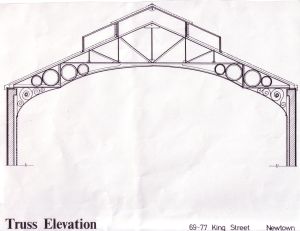 The roof has never been hidden by a plaster ceiling and is supported by a row of fine wrought-iron trusses, spanning clear across the space. The trusses in turn support a raised central roof with clerestory windows on either side, extending almost the full length of the hall. The top of this section could be opened by the pulley previously referred to, with roof sections sliding down exterior iron guides.

Detail view of the interior wall at the King Street end of the Trocadero building. Taken by R. Thorne. 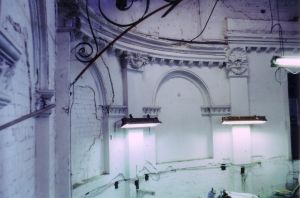 The gallery extended around at least three walls of the interior, being accessed by the aforementioned entrances from first floor level at the south end and by internal stairs at the northern end. Interior walls of plastered brickwork are divided into regular bays of classical pilasters with Corinthian capitals. Within most of the bays are arched recesses above the gallery level, and square ones below. The main cornice has fine moulded plaster medallions. Some of the recesses are pierced by original and later windows. At each end of the hall there is a raised cornice on pilasters surmounted by a large semi-circular fanlight with timber windows. A cinema screen is thought to have been suspended from a truss at the northern end of the hall from about 1913 to 1916, with projection from one of the gallery entrances in the south wall.

Interior View Looking toward the entrance Taken by R. Thorne. 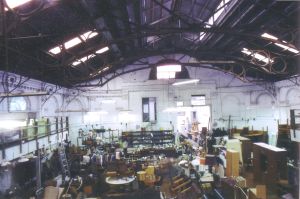 Beneath the hall and accessed from it by a broad timber staircase is a concrete floored space with roller shutter and timber door access to Campbell St. There is also a roller shutter at the end of Longdown Street on the western side. This space is approximately half of the hall above. A boarded ceiling is supported on plain steel columns. This area was originally a cafï¿½with fountain.

By 1895 the rink had closed through declining interest and competition.

Photocopy of a ‘photo of Mr. Fred Ferrier from the ‘Illustrated Sydney News’ 27 June 1889. Courtesy of the NSW Public Library 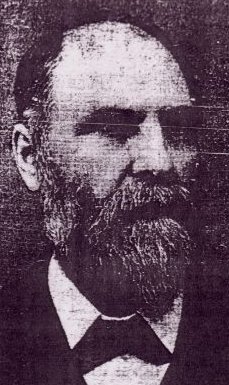 When Ferrier defaulted on his mortgage in 1895 coachbuilder Sydney Simpson bought the property and conducted his own business on the premises for some years together with a variety of smaller enterprises such as dentist Featherstone, bootmaker Hill and printer Devey. On 12 September 1903 the Chronicle and Weekly Review announced that this fine hall, one of the largest and best ventilated in the suburbs, has been thoroughly renovated. May be let for Balls, Socials, Skating, Parties or any form of approved amusement. For terms, apply to I. H. Williams, 59 King Street, Newtown. Skating did return in 1904 under the umbrella of Williams Skating Rink and Music Hall, alongside a bootmaker, real estate agent and tailor, amongst others. In 1909 the Grace family formally purchased the property renaming it the Elite Rink and Cafï¿½Trocadero which no less than the Mayor and Mayoress opened on Wednesday 14 December 1910, with the rink being leased until 1912 to Turner Brothers who were also bicycle manufacturers. From 1913 to approximately 1916 moving pictures were screened in the hall, then called Trocadero Picture Palace. While subsequent use of the hall is known to have included boxing matches and vaudeville, use of the hall for entertainment came to an end with occupation by Properts Motor Body Works at first under lease from the end of 1920, then by purchase in 1945. The owners since 1920 had been Grace Brothers Ltd. 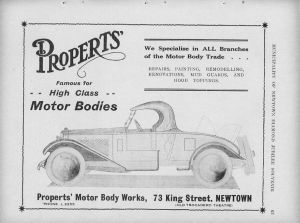 Shops and upstairs accommodation continued to provide a variety of services, including, from about 1918 until 1922, the Sydney University Womens Settlement Services which operated the Newtown Centre for soldiers wives and mothers. Other upstairs areas were given over to residential use from time to time, for caretakers, shop lessees and other persons.

Properts stayed until about 1969 when the firm closed, but a lease was given to another motor repair business run by Messrs Gal and Karam. In 1974 the whole property was purchased by the Anglican Church for Moore Theological College, and, in 1981, Con Dellis took out a lease of the hall area for a second-hand furniture business.

In 1994 the whole building was vacated for structural modifcations to comply with South Sydney City Council fire safety requirements. While no tenancies have since been granted, the interior of the building was used briefly in 1994 as background for a film commercial on underwear. The premises now await whatever the present owner is planning.

This unique property has incorporated recreational, entertainment, community organisational, retailing, residential and manufacturing activities in its 115 year life. Its rich history and heritage are of significance to the people of Newtown, and one can only now speculate on what a complete restoration would have meant. One final intriguing aspect of the story is that no post-card of the Newtown Trocadero has ever been located, when just about every building or vista in that era was thought worthy of such depiction.

Sources for this article are acknowledged as follows: