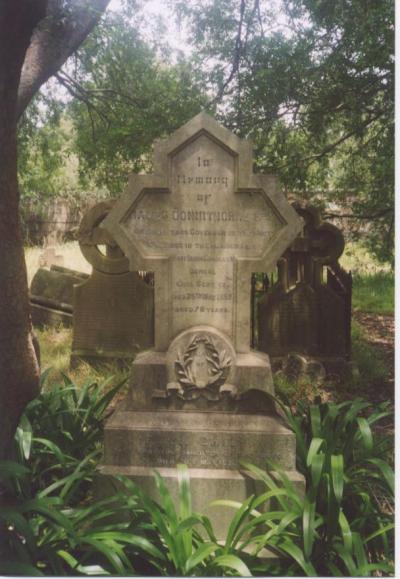 Eliza Donnithorne is one of the most famous people in Newtown’s history, though the controversy about her life and its influence is worth investigating. Her story is not only contained in the pages of books or chapters concerning Newtown’s past but can often be seen in ‘historical features’ in metropolitan Sunday papers. There is even an opera named after her, Miss Donnithorne’s Maggot (a maggot being a kind solo dance), which was first performed as part of the Adelaide Festival of Arts in 1974 and has recently been shown to audiences in London and Berlin. Her tragic life also featured in a 1987 children’s book (L. Gleeson’s I am Susannah), and she even scores a column in the Australian Dictionary of Biography, a series of tomes usually reserved for those having an impact on Australia’s history. Additionally, punching her name into an internet search engine reaps a bounty of matches.

But what of her story? There are several versions available.

Eliza was the daughter of James Donnithorne, an East India Company Judge and Master of the Mint in Calcutta. Most versions of the story states that he arrived in Australia to retire in 1836, bringing Eliza with him. His wife and other daughters having apparently died of cholera and his two sons, both of which had established military careers, stayed in India.

James and young Eliza settled in Cambridge Hall on King Street (between Georgina and Fitzroy) and renamed it Camperdown Lodge. James Donnithorne invested in property, both in New South Wales and other mainland colonies, and built up a sizeable estate which Eliza inherited upon his death in 1852.

It is about this time that the story starts to get a bit sticky. Most sources agree that in 1856, at the approximate age of 30, Eliza prepared to wed. As Eliza was one of Sydney’s social elite, her wedding was to be a gala and celebrated occasion. The banquet was laid out, the guests assembled, the coaches prepared to escort her the short distance to St Stephen’s church and a crowd had gathered to be entertained by the spectacle. But the groom never appeared. In one version from the 1970s he had a name, George Cuthbertson and from then the name seems to have stuck. In earlier versions of the story he is anonymous and is given various occupations such as a low ranked army officer or a shipping clerk. Some versions, which keeps Eliza’s father alive for a few more years than his headstone attests, insist that James did not approve of his only daughter marrying so below herself and either paid off or warned off the intended groom. Another version has it that the groom fell off his horse on the way from Parramatta and yet another stated that, as an infantryman, he was urgently shipped out to India. A couple of versions have as an aside the idea that Eliza was pregnant and the intended nuptials were hastily arranged so as not to disgrace the family.

From herein, the various versions of the story roughly merge again. The invited guests and the throng of onlookers slowly dissipate and the bride-to-be is left in the house alone, except for two faithful servants and the prepared wedding feast. The story goes that she insisted the banquet and the house remain in readiness for the arrival of her beloved. The door to the grand house remained ajar, held in place by a loose chain from where people could see in and Eliza could see out awaiting her fiancé’s arrival. But he never appears, the wedding table is never to be cleared and she remained in her wedding dress until her death in 1886.

Eliza Donnithorne has since been credited with posthumous fame as the character of Miss Havisham in Charles Dickens’ Great Expectations. Whilst some articles concede that the link between Havisham and Donnithorne is nothing more than coincidental, there are others pointing to ways that Dickens could have heard Eliza’s tragic tale.

The four options are –

1.    “Charles Dickens’ sons are in Australia and mention the story to their father in their despatches.” This cannot be true as Great Expectations was published well before they arrived.

2.    “Caroline Chisholm, in one of her many letters to Dickens, mentions the tragic tale.” It is true that Chisholm was a friend of Dickens and after returning to Australia from England did keep in regular contact with him during the 1840s but by the mid-1850s she suffered terribly from a debilitating illness which prevented her from picking up a pen and while many letters she wrote have been preserved there are none from this time.

3.    “Dickens read about it in the English press.” This is not really a plausible option as no press articles have been found in Australia, England or anywhere, that tell the tale until almost 50 years later. Also, as Great Expectations was published in 1860, one can only wonder how Eliza Donnithorne’s famed reclusiveness became so famous so early in her reclusive life.

4.    “Dickens heard the story from Eliza’s brothers who lived in the same town.” While Eliza’s brothers were known to be long time residents of Twickenham, According to the Dickens Society Homepage, the author only lived there briefly in the summer of 1838. This was long before the alleged nuptials in Newtown were to take place.

In reference to the Dickens relationship I share the opinion of J.S. Ryan who prepared Eliza’s biography for the ADB. He suggests that after reading Great Expectations, many Sydneysiders identified Eliza as being similarly wealthy yet reclusive as Dickens’ Havisham and that over time the story of which influenced which has been overturned.

It is also worth looking at how the story has evolved over the years in various newspapers and books. The earliest reference to the story I could find was from 1890 which states that despite the ‘rumours’ the only reason Eliza kept the door open was that she was yearning for a brother or cousin to return. Another newspaper article reminiscing about the tale wrote that while the door was open, a ferocious mastiff was kept chained up just inside to ward off thieves and murderers. Another journalist last century claimed to have tracked down Eliza’s faithful servants only to be told by them ‘our lips are sealed to everyone and everything.’ Even Dame Mary Gilmore waded into the story saying she visited Eliza Donnithorne in 1889 (which is 3 years after Eliza died) and that her father knew the intended groom well and that his career as an army officer was ruined by the ordeal.

And what of the groom? Where did the name George Cuthbertson come from? And why not for a century later? The births, deaths and marriages records have never heard of Cuthbertson. Where did he come from, and where did he go?

Much of the research I have done has only turned up un-sourced newspaper articles giving various accounts of the story and the Dickens connection; each article seeming to be loosely based on those that preceded it. Why, if this story is so established, has no one ever done any fundamental research of primary documents? Why in the last 100 years has nobody ever checked the St Stephen’s parish records regarding the intended nuptials?

All stories write that Eliza worshiped at St Stephens. Both Eliza and her father are buried there and she donated money towards the building of the magnificent Blacket designed edifice that replaced the original church in 1874. In lieu of this, it is a pretty safe assumption (it is not only an assumption of mine but also one of others retelling her story) that her wedding was to take place there as well.

The old St Stephen’s parish records are housed in the Anglican Diocese Archive in Sydney and thankfully the St Stephen’s marriage banns register is still available. Marriage banns were formal announcements made to a congregation about an intending wedding. By law, the minister had to announce the wedding on at least three consecutive weeks prior to the marriage to give any who oppose the wedding an opportunity to have the nuptials cancelled. The St Stephen’s marriage banns register has a list of intending brides and grooms followed by three columns in which were written the dates that the banns were read out. A curious number of intending marriages were crossed out after one or two church announcements. But from 1845 to 1865 neither the names Donnithorne or Cuthbertson appears. By a happy coincidence, the year that the wedding was supposed to take place, 1856, was also the first year of civil registrations of marriage. On this register too, there are names crossed out as planned marriages, for one reason or another, never made it to the altar but again these two surnames do not appear.

In my opinion, there was no groom, there was no wedding. There was just an old spinster, possibly eccentric, possibly living with her faithful servants. If the sources can be believed, she was an avid reader as the only people she met at the front door, with the exception of the local clergy, were those selling books. In her will she left everything to her maids, her church and her pets. Her three line obituary in the Sydney Morning Herald mentions only that she was the daughter of Judge James and says nothing of her allegedly tragic life.

Despite the likelihood of Eliza’s life influencing Dickens, the story continues to proliferate. Yet many seem to have overlooked a more feasible explanation of how Dickens, if he indeed based Miss Havisham on a real event, need only to look at the journal he was editor of at the time. In an 1853 edition of Household Words, it tells the story of Nathaniel Bentley, the publican of a London Inn known as Dirty Dicks whose bride-to-be died tragically on the eve of their wedding. Grieving over his loss, Bentley ordered that the room containing the wedding feast be closed, sealed, and never opened in his lifetime. Why this more plausible and documented link to Miss Havisham is suppressed or overlooked in favour of a tenuous link to Eliza Donnithorne remains a mystery.

It is well established that Eliza’s grave at St Stephen’s is still the most sought after. Tour groups attend the cemetery regularly to view the headstone and hear the tale. In 2004 her headstone was broken (or vandalized) and made international news with England’s Dickens’ Society making a financial contribution to the National Trust of Australia to assist with its repair.

Whatever the real story, may she eventually rest in peace.