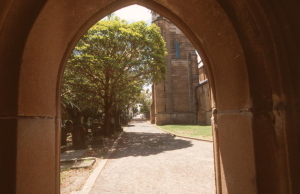 The present St. Stephen’s Anglican church is the second church by that name in Newtown, both of which were designed by Edmund Blacket. A call for tenders for the construction of “a small brick church at O’Connell Town”, the original St. Stephen’s Church, was placed in the Sydney Morning Herald, Saturday 23 November 1844.[i] H. Knight was awarded the contract to build the church, and a Mr. Brander was the carpenter.[ii] The foundation stone was laid, on the Thursday 26 December 1844, by the Right Reverend Dr. William Broughton, first Bishop of Australia, who also preached. The Reverend Dr. T. Steele, Rector of St. Peter’s Cook’s River, assisted in the ceremony that was attended by a large crowd comprised principally of residents from the immediate neighbourhood. The church was situated on the “New Town Road”, near Victoria Street, on land donated by representatives of former Governor William Bligh’s widow, Elizabeth. [iii]

The building was completed in nine months, at a cost of £417, and was consecrated on Tuesday 9 September 1845, by Bishop Broughton, at a service conducted by Dr. Steele, before a church “crowded to excess” with clergy, dignitaries, including Lady Gipps, Wife of the Governor of New South Wales, Sir Maurice O’Connell, Lieutenant Governor of New South Wales, and his wife, Mary, a daughter of Governor Bligh, the Mayor, members of the Newtown Odd Fellows Lodge, and parishioners. The newspaper account described the church as a “very neat brick edifice, seventy feet long by twenty-six wide” with a vestry and belfry. The exterior was rather plain, the main feature being large rectangular windows, and the vestry/porch in the center of the building’s three bays. The interior was “very neatly fitted up, all the pews being open”. The roof, likewise, was open.[iv] Both open bench pews and open roof were recent innovations in the colony, as was the seating arrangement for the choir, in stalls facing one another, in the chancel. [v]

With the growth of population in Newtown in the 1860’s it became clear that the small church had become inadequate. It had been designed so that it could be easily enlarged if necessary. [vi] This course of action, however, was rejected in favour of erecting a new church on a new site in Camperdown Cemetery. When finally replaced, the original church remained in use as the parish hall and Sunday School, until destroyed by fire 16 September 1938. [vii]

In order to build on the newly chosen site, an act of the New South Wales Parliament was required. A petition from the parish, signed by Christopher Rolleston, William Sedgwick, William Crane, T.C. Breillat and S. C. Brown, requested an act to enable the Bishop of Sydney to convey land to trustees of the church for the erection of a church and parsonage in the Cemetery grounds. Upon presentation by Mr. Charles Windeyer, member for West Sydney, the NSW Legislative Assembly voted, 10 February 1871, to receive the petition and proceed with an Act. [viii] The Act, entitled The Camperdown Cemetery Trust Bill, moved through both houses of parliament quickly and by late March it had received the Governor’s consent. Copies were printed by the Government Printing Office and available at 6d apiece. The Government Gazette, 2 September 1871, provided official notice of the Act. [ix]

Edmund Blacket had been appointed architect on 17 February 1871 and by June had submitted plans and called for tenders for the first part of the building. [x] Blacket agreed to provide supervision of the construction. The contract for the first stage of the stonework (walls to the height of 17 feet) was awarded to Robert Kirkham and his partner, George Dowling. The foundation stone was laid by the Governor, the Earl of Belmore, on 11 November 1871. The rector, the Reverend Robert Taylor conducted the first part of the service assisted by other clergy, and the Dean of Sydney preached. A scroll was read by Mr. C. Rolleston, and deposited in the cavity of the stone in a sealed bottle, which also contained copies of the Sydney Morning Herald and the Australian Churchman. The scroll was as follows: – “Newtown: To the glory of God, and in remembrance of the Christian Martyr St. Stephen, the foundation-stone of this Church was laid by his Excellency the Right Honorable Somerset Richard, Earl of Belmore, Governor-in-Chief of the colony of New South Wales, on the eleventh day of November, in the year of our Lord, 1871, being the thirty-fifth year in the reign of her Majesty Victoria, Queen of Great Britain and Ireland, &c., &c., &c. The Right Reverend F. Barker, D.D., Bishop of Sydney and Metropolitan. Incumbent – The Rev. Robert Taylor, of Moore College, Liverpool, N.S.W. Trustees of Cemetery – Messrs. T.C. Breillat, S.C. Brown, W. Crane, sen., C. Rolleston, and Dr. Sedgwick. Church-wardens – Messrs C. Rolleston, Dr. Sedgwick, and W. Crane, sen. Church Building Committee – The Revs. R. Taylor and W. Scott, M.A.; and Messrs. M. Albery, M. R. Allan, R. N. Banks, D. Bedford, T.C. Breillat, S.C. Brown, Hon C. Campbell, Hon. J. Campbell, H. Chisholm, W. Crane, sen., W. Crane, jun., W. Curtis, G. Davison, Captain Evans, R. Fowler, F.T. Humphery, W.J. Jordan, M. Metcalfe, R.C. Murray, R.J. Rawsthorne, C. Rolleston, G. Rossitter, C. Sampson, Dr. Sedgwick, H.R. Smith, H.E. Vaughan, H. Vickers, and W. Wilson. Honorary Treasurers – Messrs. T.C. Breillat and S.C. Brown. Honorary Secretaries – Rev. R. Taylor and Mr. M.R. Allan. Architect E.T. Blacket, Esq. Builders – Messrs. G. Dowling and R. Kirkham.” [xi]

It was announced that the church when completed would cost £8000, and £6000 would be needed to complete the edifice so that it could be used for divine service. £3000 had already been subscribed by the inhabitants of Newtown, and about £900 by the friends of those who had been buried in Camperdown Cemetery. [xii]

The building progressed quickly and by September 1873 tenders were called for the second stage of the stonework and completion of the walls of the church, clerestory, tower and steeple. [xiii] Robert Kirkham was awarded the contract for the second stage. Others involved in the construction of the church were William Curtis, roofing, W. E. Elphinstone, carpentry, and W. Watson, sittings. [xiv] St. Stephen’s was completed in 1874, and a meeting of the subscribers to the building fund was held on Saturday 28 March to allot and let the pews. [xv] The first service of worship held on 5 April 1874, Easter Sunday, and an official opening on 9 April.[xvi] The tower and spire were completed in 1876.

St. Stephen’s is an English Decorated Gothic Revival church in cruciform plan with side aisles, gallery, two vestries, and porch.  The building is dominated, on the north side, by the fine 140-foot high stone tower and spire, which can be seen for miles. The walls of the church are sandstone, quarried from the nearby Pyrmont stone quarries. The exterior ornamentation, apart from the stone traced windows is restrained. Interior columns are of Melbourne bluestone and the roof is slate. With dimensions of 110 by 48 feet, and a final construction cost of £13,000, it was the largest and most prominent building in the area, and was widely recognized as one of Edmund Blacket’s finest designs. The full amount for the cost of the building was subscribed at one time making it possible to erect it in a continuous operation without stops and starts unlike so many other churches Blacket designed.  Eminent architectural historian Morton Herman calls the design of St. Stephen’s, “a magnificent success…It is a church designed to be seen all round from every angle, and from every angle it is eminently satisfactory”.[xvii]  In another of his books, Herman designates St. Stephen’s as “one of the finest Gothic Revival buildings in Sydney.” [xviii] Joan Kerr describes the church as “one of [Blacket’s] most successful buildings”, Blacket having, by 1870 “completely mastered his Decorated Gothic repertoire…and [being] more confident in composition and less fussy in detailing than is some of his earlier designs.” The tower and spire, she notes, are one of Blacket’s finest compositions.[xix]

The two-manual pipe organ was built by the London firm, J.W. Walker and Son, in 1874, at the cost of £800. 20 Blacket designed the organ case, sending specification to Walker and Son. He also was instrumental in having the organ placed in the south transcept rather than in the west gallery. The bells, a set of twelve hemispherical bells, new type of bell, manipulated by a keyboard, were ordered by Blacket from the well known foundry of Messrs. Mears and Stainbank, Whitechapel, in the East End of London. Prior to installation in St. Stephen’s tower, they were exhibited in the great Sydney International Exhibition of 1879-80. 21

Other than some minor alterations to the organ in 1895 by G.K. Sandford of Newtown, 22 and a redesigning of the chancel by prominent Sydney architect, Burcham Clamp, in 1927 and carried out by J.M and A. Pringle, 23 the church remain as Blacket designed it. The church is heritage listed.

[xiv]It is important to note that there have been incorrect attributions of the builder in several books. In the scroll that was placed in the foundation stone, 11 November 1871, Robert Kirkham and George Dowling were recorded as the builders. [Sydney Morning Herald, 11 November, 1871, p. 4; SMH, 18 Nov, 1871, p. 5] In his St. Stephen’s Church, Newtown: jubilee, 1974-1924, John Bidwell notes the scroll and the attribution of G. Dowling and R. Kirkham as builders on p. 13, but, however, adds on p. 17, referring to the second stage of the building, “The following gentlemen were associated with the erection of the building: E.T. Blackett (sic), architect; W. Kirkland, contractor for masonry; W. Curtis and W.E Elphinstone, carpentry; W. Watson, Sittings.” In his 1946 book, A stroll through the historic Camperdown Cemetery, NSW, P. W. Gledhill, following Bidwell, refers to W. Kirkham as ‘contractor for masonry’. Similarly in the book Camperdown a history of Camperdown Cemetery & St. Stephen’s, Newtown, edited by Alan Nichols, and published in 1976, the stonemasonry work at St Stephen’s, Camperdown, was attributed to a W. Kirkham, and W. Curtis was named as builder. There is no record in the Sands Directories of Sydney of a W. Kirkham, or Kirkland, stonemason. The only stonemasons working in Sydney in the 1870s, by the name of Kirkham were Robert Kirkham and his younger brother, John.  There were none by the name of Kirkland.

. William Curtis was the roof contractor.