When the Newtown Municipality was incorporated, it clearly had the aspect of a village rather than of sparsely dotted homesteads. By 1863, the 480 acres were already divided between at least 558 individual property owners.1 Table 1 represents the value of the land owned by these individuals. Over half owned land valued at less than £30, but because the land was rated on its improved capital value, these figures do not indicate the size of individual holdings.

Table 1. Page 17. A number of individuals held considerable property: Josephson owned a tract of land stretching from Enmore Road almost to the Illawarra Railway, 1 Holt owned 9 acre ‘Camden’, 2 as well as ‘Essington’, 2 the Church of England Cemetery Company owned about 13 acres. 3 Estates previously mentioned were of considerable size. For the number of property owners to have been more than 558, and the average holding less than one acre, it is quite apparent that considerable subdivision had taken place in the area prior to incorporation. Map 5 illustrates the chronology of subdivision in the municipality. It is concerned solely with the final subdivision as it appears in current files in the Land Titles Office. Slight changes have since occurred, for example in resumptions for schools, amalgamation of sites for garages, home units etc., but subdivision of relevant blocks was so complete during this period that further subdivision was generally impracticable. Subdivided areas were not always immediately built upon, but, in the subdivision process, the die was cast: the land was unlikely to be used for any other purpose. These subdivisions were of the dimensions accepted as building sites for inner- city residential development, with a frontage ranging from 16′-23′, usually 19′. Though each owner built in his own time, according to his own resources, the pattern of land use was permanently established. Page 18. 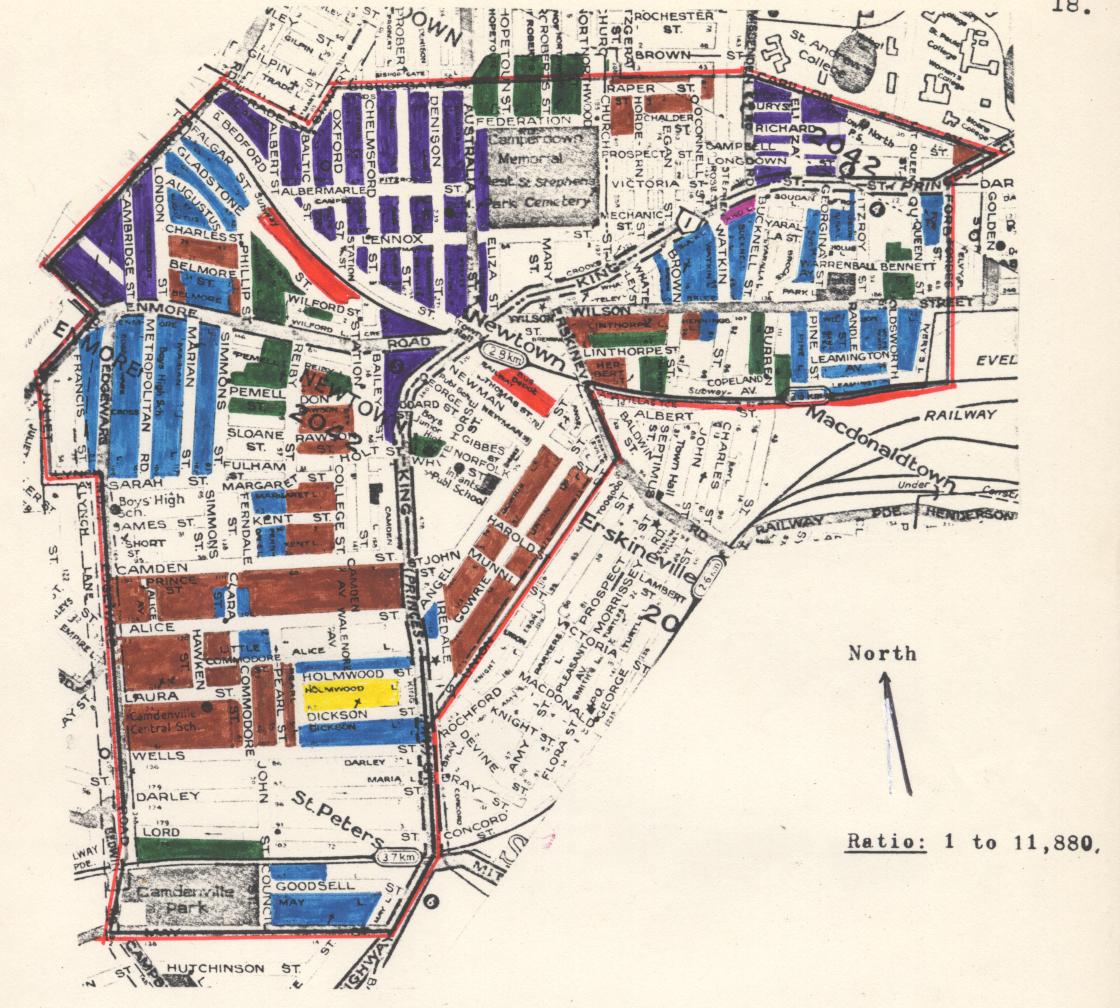 Map 5. Chronology of subdivision within the borders of the Municipality of Newtown. Page 19. The first subdivision to which this map refers took place in 1845. After a long legal battle, the executors of Bligh’s estate were able to make an initial subdivision of twenty-five allotments in 1841. 1 Captain Maurice O’Connell, husband of Bligh’s daughter, came into possession of Bligh Terrace, which he subdivided into 348 lots in 1845. The majority of purchasers bought more than one allotment, 2 but the subdivision, as set out then, has never been altered. 3 In 1854, ‘Kingston’ was subdivided by its then owners, Thomas Mort, G. W. Allen, Thomas Smart and Thomas Holt. Men of energy and vision in other enterprises 4 they clearly saw that the future of land in such close proximity to the city was to provide residential accommodation. 5 The North-West corner of Devine’s original grant was subdivided in 1857. 6 Page 20. Significantly the last two adjoined Newtown Railway Station, opened in 1855. 1 This pattern of heavy subdivision was both interrupted and ultimately encouraged by the major event of the 1850’s and 1860’s: the gold rushes, which were “the making of Newtown”. 2 When the fever died down, unsuccessful miners straggled back to the cities where they joined their more astute brethren who had earlier deduced that the real fortunes were to be made in providing for their countrymen’s material needs in urban-based enterprises. This enormously increased population 3 had to be housed. The demand increased as the influx – largely single males – married and had families. 4 They in turn married and their housing demands, together with those of more recent immigrants, 5 were responsible for the building boom of the 1880’s. Page 21. Workers required accommodation close to the government offices, wharves, manufacturing and building sites which provided their livelihoods, and where social and commercial life was well established. The inner city suburbs came into their own. In the 1870’s and 1880’s, subdivision proceeded apace. By 1892, at least a portion of each of the initial grants was subdivided to its present size – indeed this applied to the greater proportion of the borough. The final subdivisions recorded on Map 5 followed two basic patterns: a series of sales where the size of the block was progressively reduced, or an initial sale which, in one step, achieved the same result. Maps 6-8 illustrate the former pattern. This tiny portion of Codd’s grant, together with Wilford’s adjoining property was purchased by Breillat, a Sydney flour miller, in 1854. This section was subdivided by his executors in 1874 (Map 6), but the whole estate, ‘Thurnby’ was purchased by Judge Foster. In 1881, it was further sub- divided (Map 7). Ross’ 1883 subdivision reduced it to its present dimensions (Map 8). 1 Even then, the allotments hardly sold like the proverbial hot cakes. More than half the blocks offered for sale at the April auction were offered again in September. Land in Newtown did not always sell well, even prior to the slump of 1888. Page 22 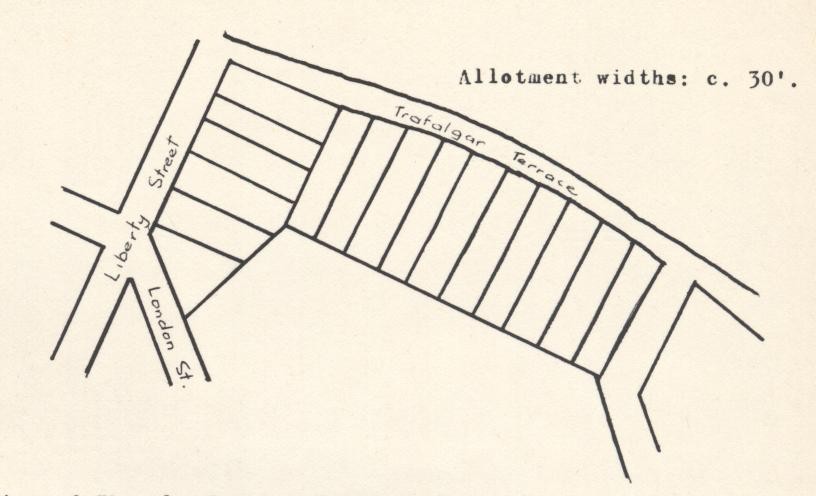 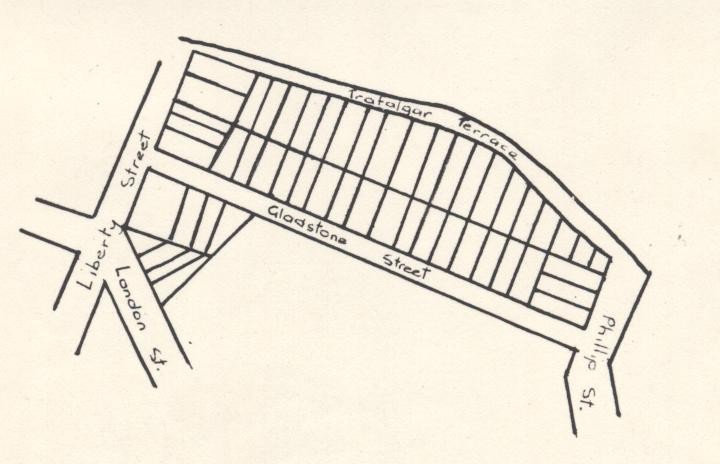 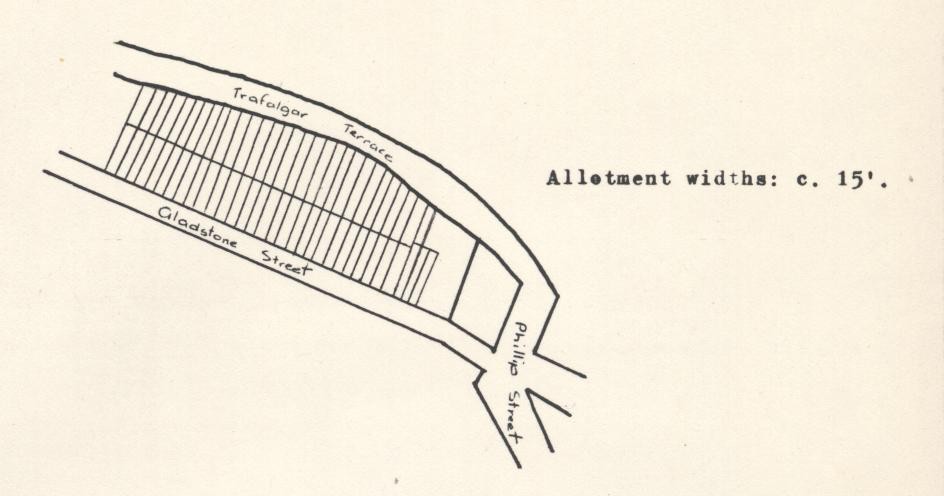 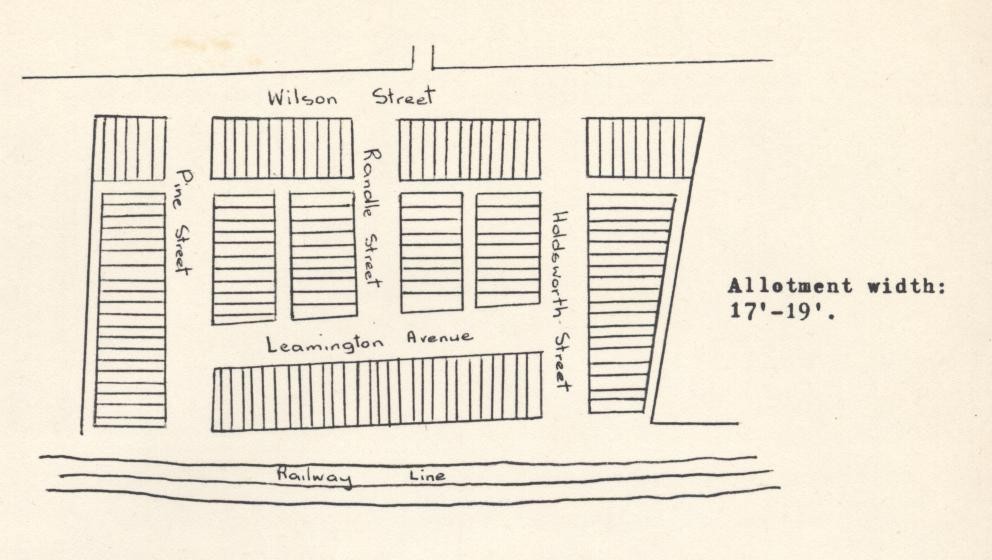 Map 9. The Pines Estate: First Subdivision. For sale at auction, 3rd December, 1887. Richardson And Wrench Auction Poster. Newtown Subdivision Maps, No number, Box 1, Mitchell Library. This sale was an exception to the almost inevitable pattern followed when the blocks which boasted the large mansions were auctioned. The normal pattern was to subdivide and sell off the extensive grounds, whilst retaining the home. In some cases, the remaining mansion and land were auctioned within years: Camden College (Maps 10 and 11) and ‘Holmwood’ (Maps 12 and 13). In other cases, they were not sold until this century: Linthorpe (Map 14). Other ‘mansion blocks’ which followed this pattern were Reiby, Stanmore, Ashley, Leichhardt Lodge and Gowrie Estates. Page 25. 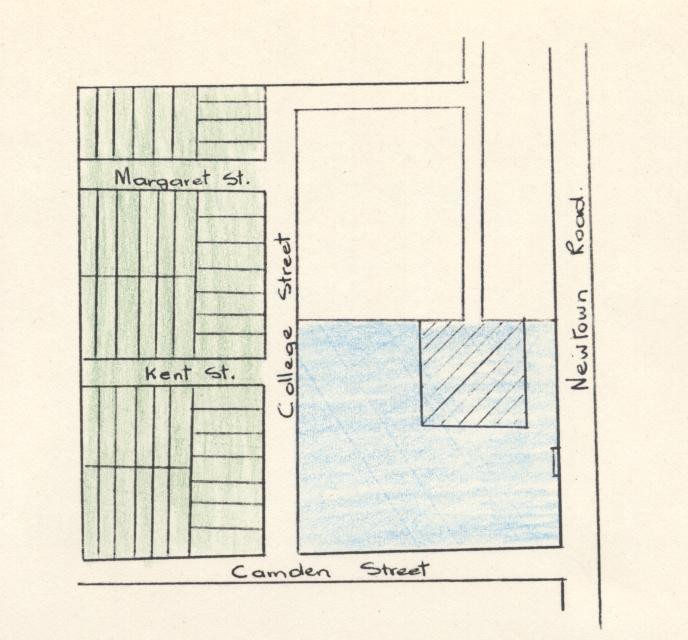 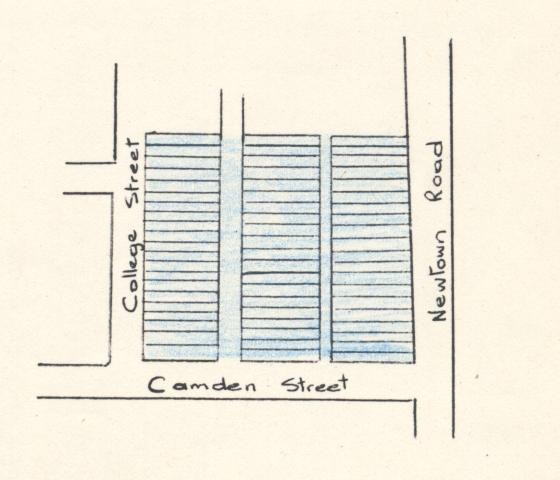 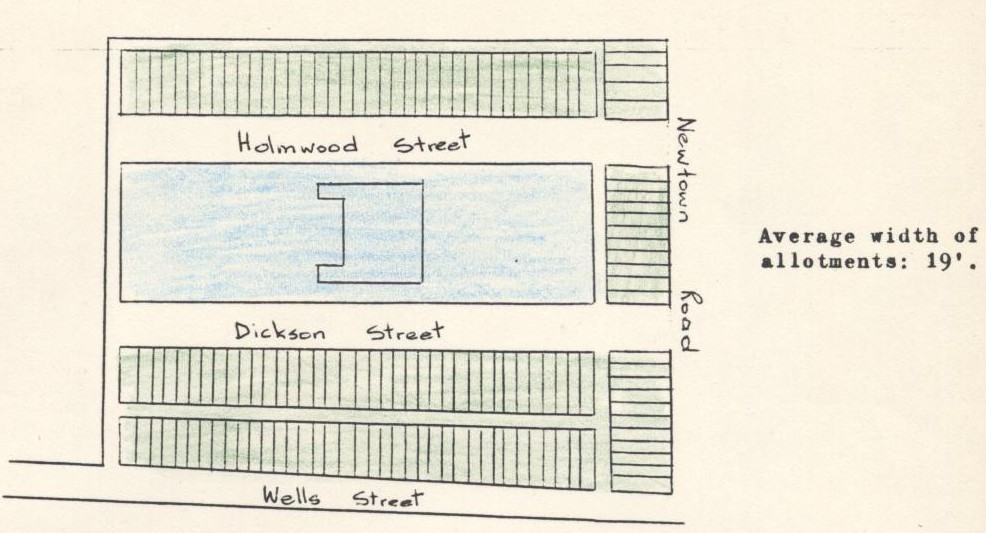 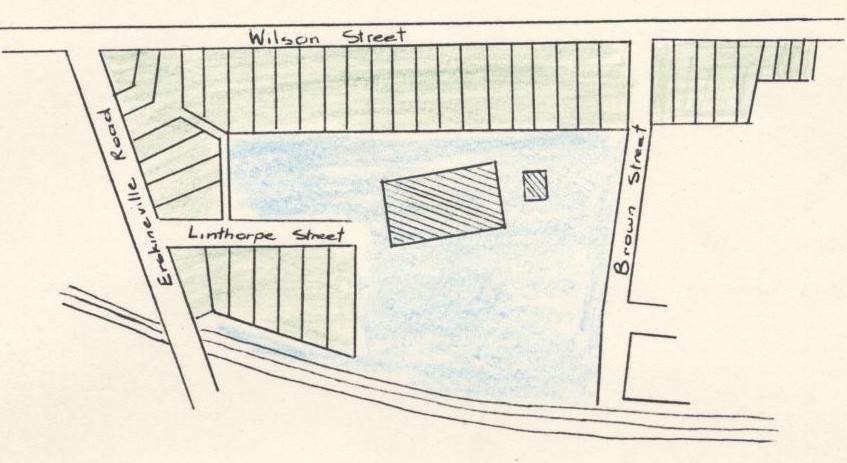 Map 14 a) (Green shaded area) Linthorpe Estate, Newtown, as subdivided by April, 1875. Deposited Plan 103. Land Titles Office: dated 10th April, 1873. b) Remainder of Linthorpe Estate (Blue shaded area). For sale at auction, 2nd December, 1905. Raine And Horne Auction Poster. Newtown Subdivision Maps, No number, Box 1. c) Remaining twelve blocks of Linthorpe Estate. For sale at auction, 15th September, 1906. Raine and Horne Auction Poster. Newtown Subdivision. Maps, No number, Box 2. Page 28. As land and building companies and societies often appear as vendors on subdivision maps and brochures, it is quite apparent that they purchased properties privately and promptly subdivided them, often in quick succession. A portion of Camden College estate was sold in one block by its trustees in September 1888. Three months later, it had been divided into fifty-six allotments, mostly with a 17′ frontage, which were offered at auction by the Mutual Provident Land Investing and Building Society. (See Maps 10 and 11 and photograph 3). Almost as rapid was the action of the Sydney Permanent Land and Building Society which purchased Hanson’s Paddock in January 1880, 1 and offered it for sale, subdivided into 106 allotments in June, 1880. (See photograph 4). Other building companies involved in Newtown land sales were the Metropolitan Permanent Building and Investment Association (‘Enmore’: 1883); the Excelsior Land and Investment Building Company (‘Newtown Markets Estate’: 1884; ‘Ferndale’: 1886); the British Australian Land and Banking Company (‘Bello Retiro’: 1888; McGaa’s property: 1891). 2 It is probable that there were others, as the vendor’s name is not always supplied on the advertisements. Page 29. The advantages such companies had over private vendors was their ability to offer liberal terms to their prospective customers. Photographs 3 and 4 illustrate their variety, aimed to entice buyers from all income brackets. This encouraged speculation, and the “exciting game of unlimited gambling on land values” 1 was to contribute to the financial collapse of 1893. Newtown land auctions, though they never reached the dizzying heights witnessed in Melbourne, 2 were never-the-less, quite exciting events. Special trains were often hired to convey prospective buyers to the auction 3 or free tickets offered to tram and train travellers. 4 Champagne lunches were sometimes provided. 5 Advertisements stressed panoramic views, clean air, healthy drainage, proximity to the city, transport facilities, access to city gas and water and Newtown’s commercial development. Page 30. 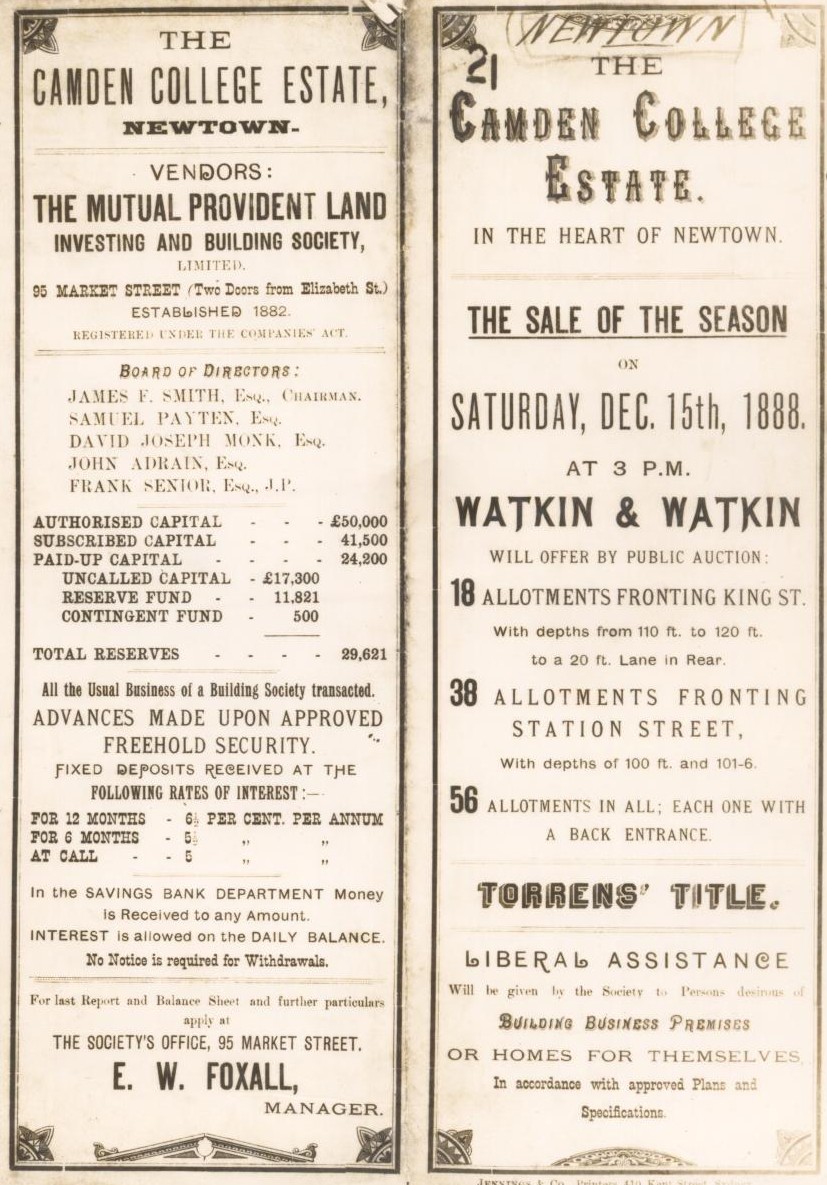 Plate 3 a). Portion of the auction brochure advertising the sale of Camden College Estate. Page 31. 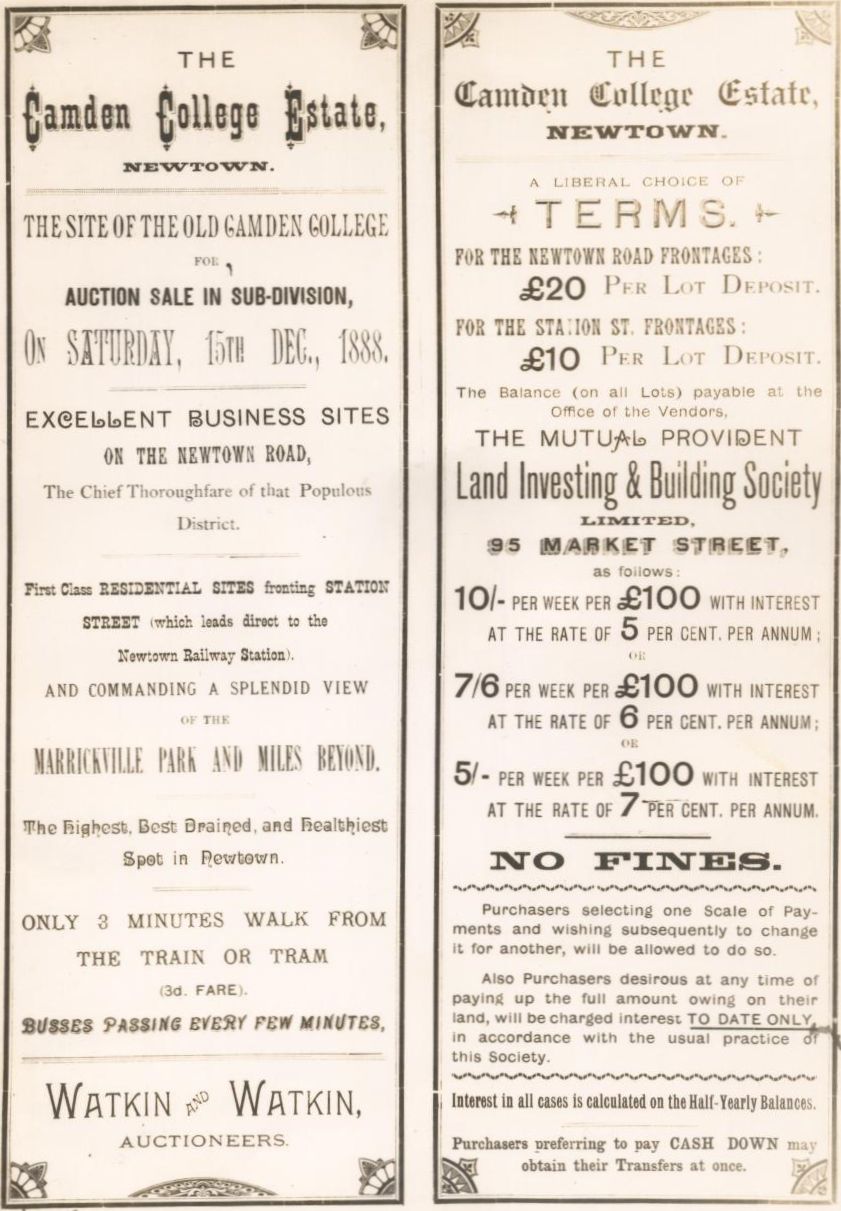 Plate 3 b). Remainder of the auction brochure advertising the sale of Camden College Estate. Page 32. 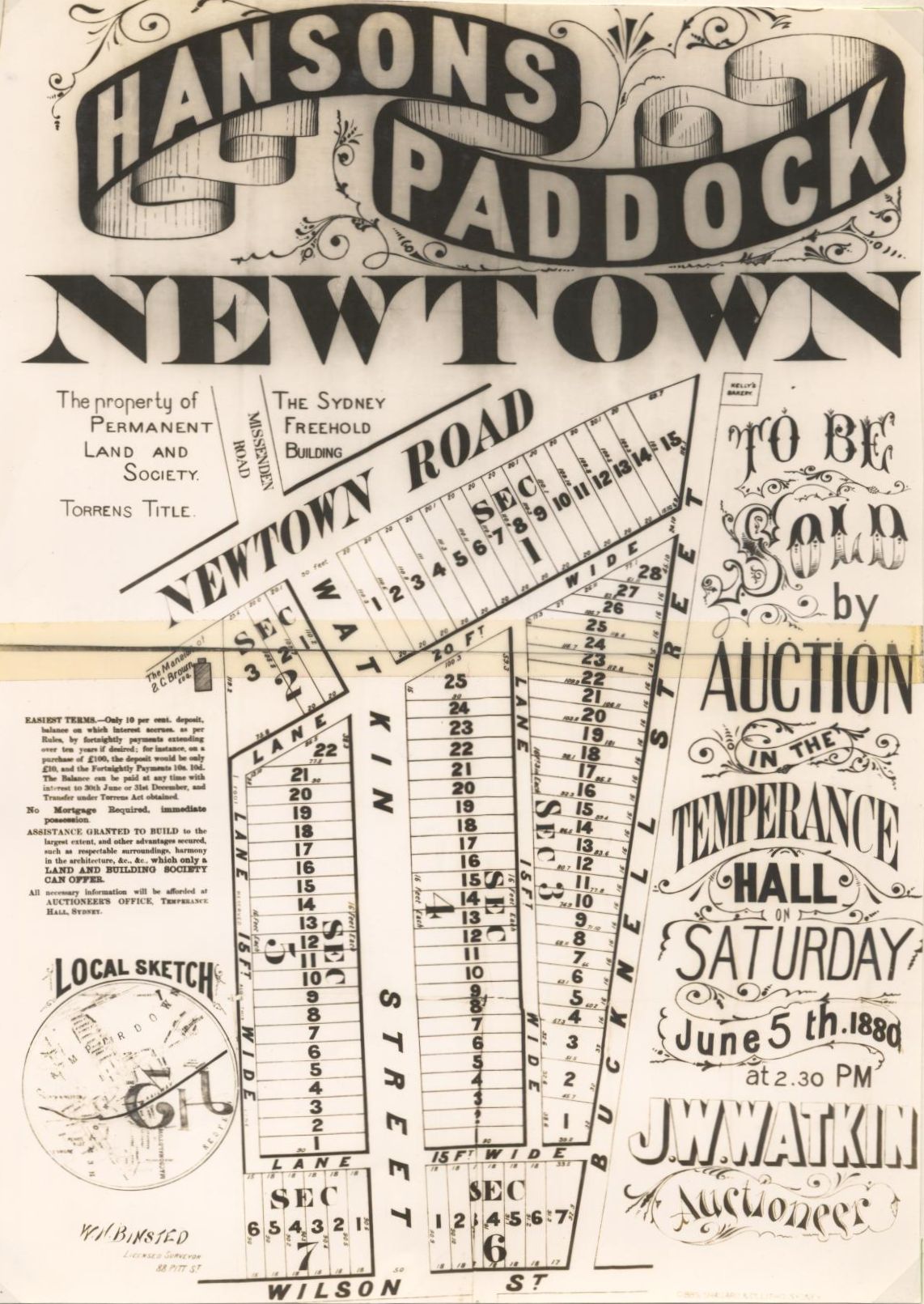 Plate 4. Auction Poster advertising the sale of Hanson’s Paddock. Page 33. Land prices varied considerably. Naturally more was paid for a business site in King street than for a residential site at a point far removed from shops, transport, gas and water mains. In 1885, for example, land fronting King Street at the Darlington border sold for £19/-/- per foot; 1 land in Bucknell Street, off King Street, sold for £5/17/- per foot; 2 land in distant Edgeware Road, adjoining Marrickville, sold for £3/-/- per foot. 3 However, in 1882, land in the commercial centre of Newtown, already scarce, sold for £110/-/- per foot. 4 Map 15 illustrates the cost of nine allotments on the Enmore subdivision. Their position vis-a-vis Newtown’s transport and central commercial area can be ascertained from Map 5. Not all blocks sold automatically and well, however. Hardie and Gorman offered 151 allotments and 18 houses of the Goodsell Estate, adjoining the Illawarra Railway, for auction in November, 1882. 5 Only 55 allotments and ten houses were sold, so a ‘clearing sale’ was held on 13th January 6 and another the following week. 7 A further auction in March 1885 failed to dispose of the albatross, which was offered for sale in one block, “if not, then individually” in January 1889. 8 Page 34. 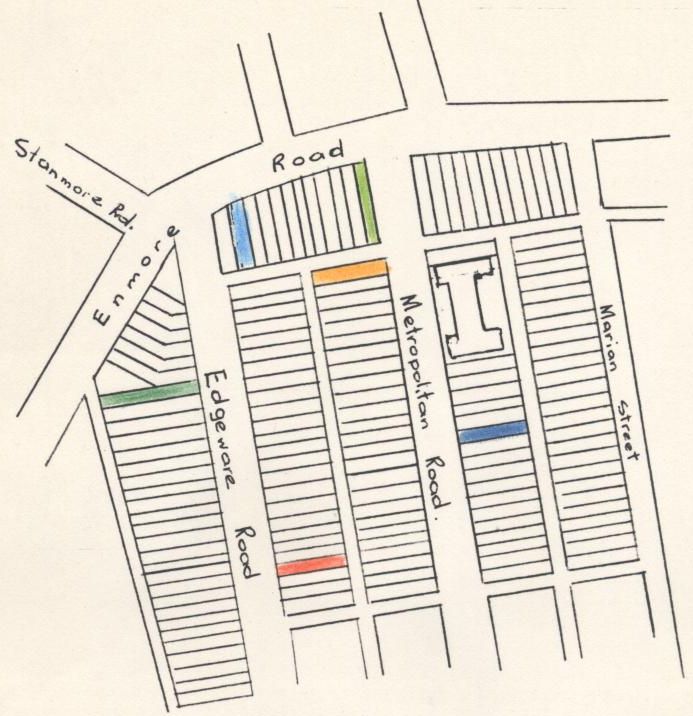 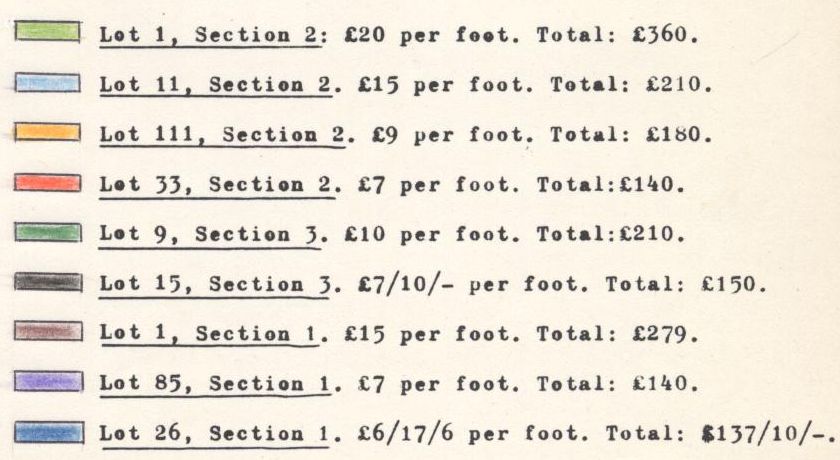 Key to Map 15. Source: Richardson And Wrench Contract Book 30 (old firm), pp. 192-207. Page 35. Some allotments were still for sale in 1901. 1 Difficulty was also experienced in selling the ‘Holmwood’ Estate, subdivided in 1877 (Refer to Map 12). By 1890, only 101 of the original 134 allotments of that subdivision had been sold. 2 In 1901, 73 were still for sale, as were 19 of the original 70 advertised in the ‘mansion section’ subdivision of the same estate in 1890. 3 (Map. 13). It will be recalled that only 26 of the 62 allotments of the small section of Thurnby Estate (Map 8) were sold at the first auction in April 1883. As the three boxes of subdivision posters and brochures contain mostly material from major sales conducted by large firms, the failure of land sales only emerges when the land is subsequently re-auctioned by those firms. Numerous unsigned contracts prepared prior to large and small land auctions also appear in both Hardie and Gorman and Richardson and Wrench Contract Books. Amongst large sales in this category was Enmore Estate, offered at auction on 3rd December, 1883. Of the 265 lots offered, only 101 sold on the day and a further five had been privately contracted by 8th January. 4 Such ‘buyer resistance’ is not surprising after about 1888 when Sydney land sales slumped and land companies began to fail. However, such evidence as there is suggests that land sales in Newtown, handled by the major firms, were not, even in the boom of the early 1880’s, the affair of popular imagination.   Page 36. Most research in this field has been conducted in Melbourne. This somewhat surprising result in Newtown indicates that more research into land sales in the Sydney ‘boom’ of the early 1880’s is required. The subdivision process in Newtown, then, followed the whim of individual landholders, who, except for certain minor regulations such as required street widths, were a law unto themselves. This freedom was to redound upon the borough council charged with the responsibility of servicing the area. Next to lack of finance, its greatest problems were directly attributable to random subdivision of this “fundamental resource. ” 1