An important factor in the life of any city, town or suburb is the availability of transport. This may take various forms such as the railways, tramways, motor buses, motor cars, horse-drawn vehicles, bicycles and plain walking. All these modes of transport were used in Newtown in the period from 1892 to 1922. While Newtown, Enmore and St. Peters were to benefit from the transport systems which passed through them there was also the disadvantage arising from the newer suburbs drawing people away from the inner city because it became possible for them to live further away from their place of employment. As long as they could afford the transport costs they could enjoy the benefits of an outer suburban life. Naturally this meant that those who could not afford to live too far from their workplace tended to remain close to the city while their middle class neighbours moved out.

Newtown was fortunate to be one of the first stations on the western line to Parramatta which was opened on 26th October 1855 before the municipality was even incorporated. The station received its name from John Webster’s New Town store which occupied the site of the present Oxford Hotel. The passing of the Illawarra road over the railway at this point was considered ample reason for the existence of a station. At this time Newtown was the first station after Redfern, there being no Macdonaldtown station until 1877.1 The original Newtown station was located to the west of the King Street over-bridge about where Crago’s Flour Mills still stand. Of course, the street leading up to the station was called Station Street. There were

two staggered platforms, connected first by a level crossing and by a bridge from 1870. A new station was erected in 1877 with a new footbridge and goods office from 1878 when both platforms were lengthened. In 1879 a new waiting shed and a gate keeper’s hut were erected.1 When the quadruplication of the line was completed on 3rd April 1892 the first station was demolished, the site becoming the goods yard.2 The Newtown Council unsuccessfully tried to have the overhead bridge at Station Street retained for the convenience of residents but the Secretary for Railways informed them that they would not maintain the crossing.3 The quadruplication proposal of 1886 would have necessitated the resumption of valuable properties along the whole frontage of Bedford Street, including St. Joseph’s Roman Catholic Church at a cost of £18, 000 for additional platforms on the northern side of the line. Fortunately, this proposal was rejected in favour of a new station on the eastern side of the King Street over-bridge which came into operation on 10th January 1892. Being in a more central position this led to increased passenger traffic. There was an island platform, two side platforms and the overhead booking office. Five days later gas was connected to the new platforms and waiting shed at a cost of £98 17s. A light was provided at the station entrance on 21st July 1892. The awning over the booking office was not completed until 28th June, 1902.4 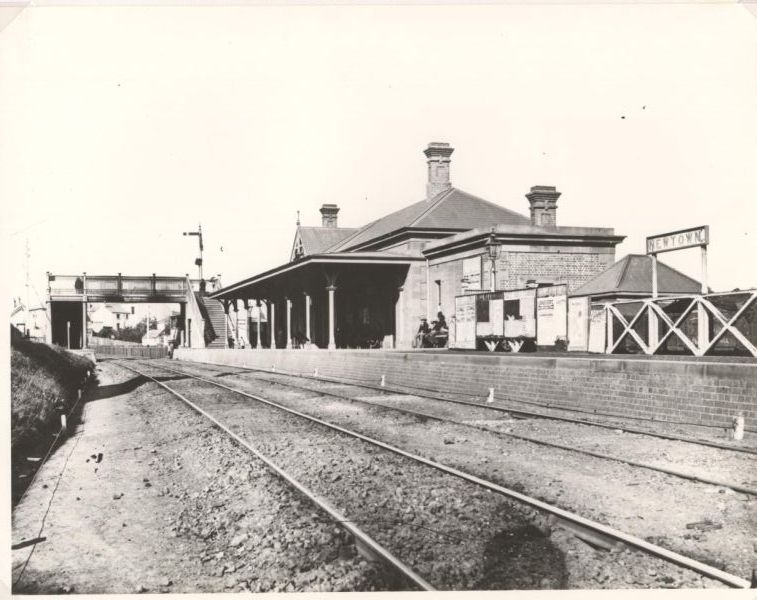 In 1880 the Newtown Station hoardings displayed posters for the sale of the Ashley Estate, Newtown, by Richardson and Wrench, Hardie and Gorman posters and a poster about an estate at Canterbury. There was also 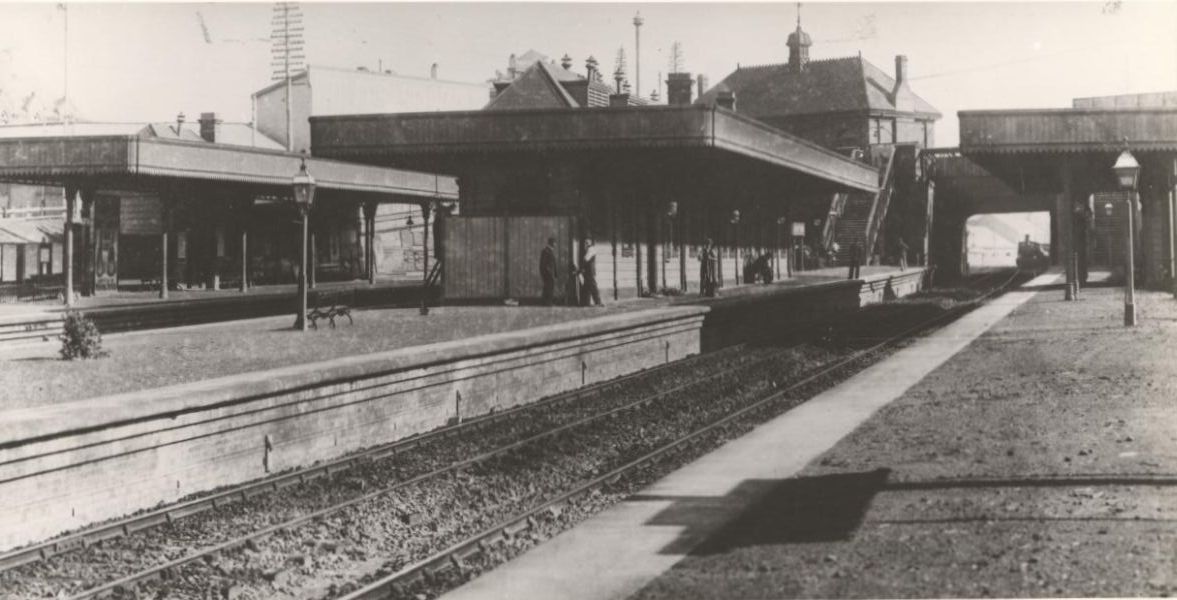 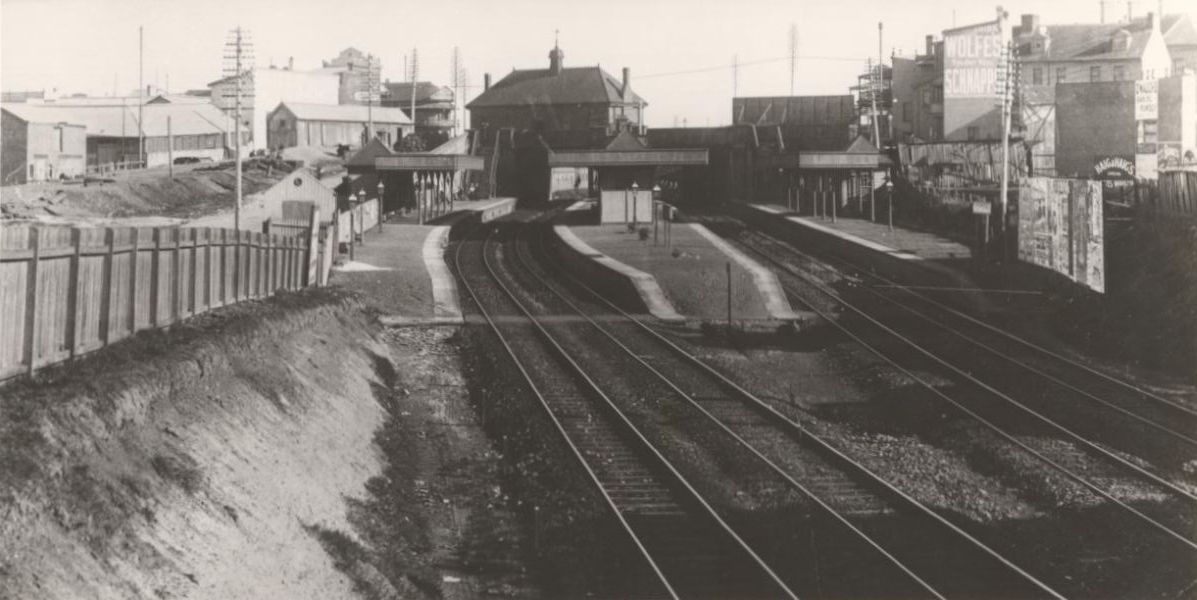 Plate 45. Another view of the station showing hoardings and the site of the later Tram Depot, c. 1895.

a map of the Newtown Borough. In 1895 a poster declared that Tooths supplied its ale and stout to the principal hotels. Pears’ soap had many posters next to the one for Paling’s music store. On the buildings backing 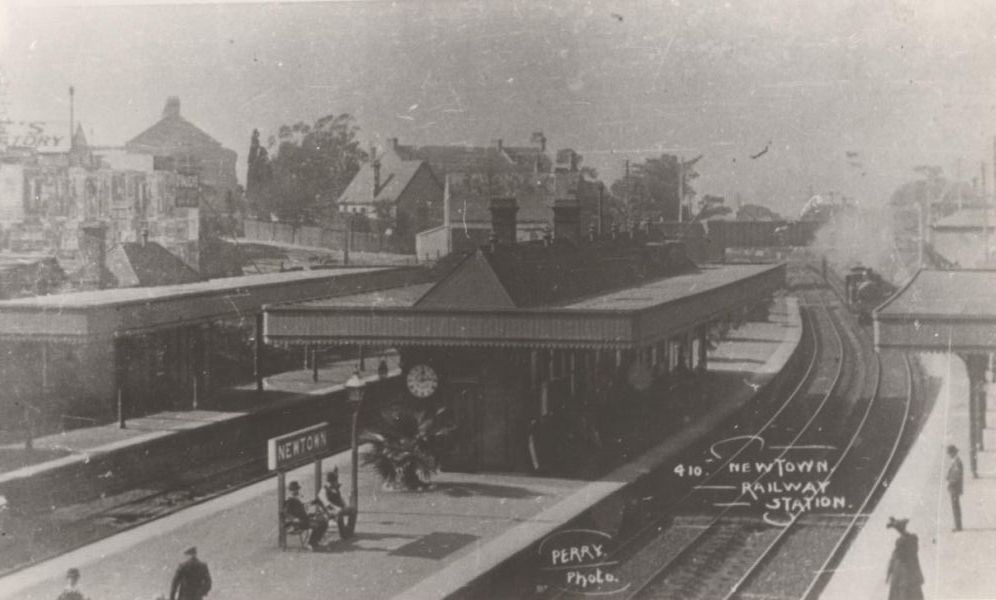 onto the railway line Wolfe’s ‘The Only Real Schnapps’ and Haig and Haig’s Special Scots Whisky competed with Dr. Waugh’s Baking Powder. In 1900 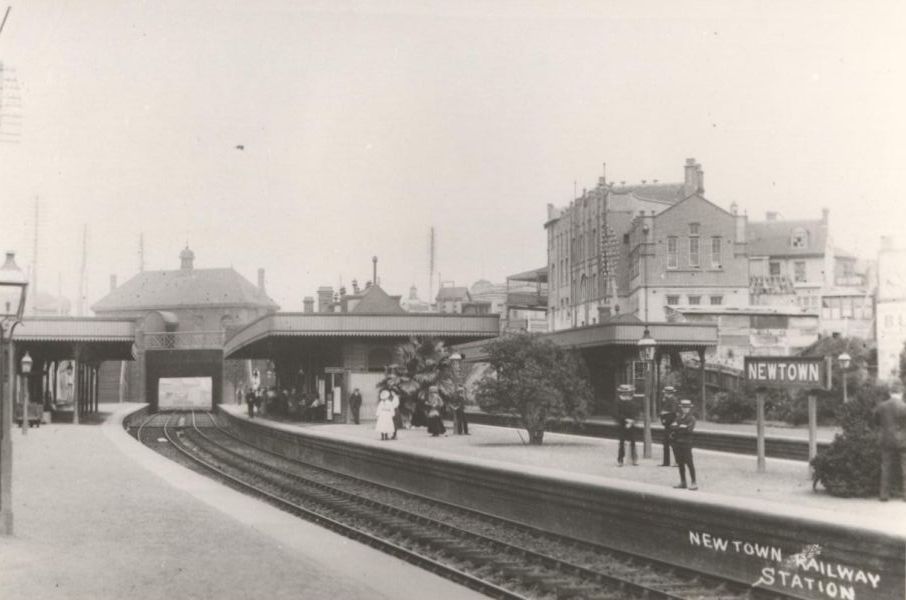 Plate 47. Newtown Station, c. 1914. The Town Hall can be seen past the balcony of Croad’s Bank Hotel.

Newtown Station had a large clock on the island platform. Palms grew on the platform along with other trees and bushes. Men wore hats and so did

women. In 1914 schoolboys wore straw boaters. Girls’ skirts reached past their knees showing a glimpse of black stocking. Women wore theirs ankle length. Passengers waited in the shade of the platform awning.1 Newtown Station as we know it has changed much from the early days of the twentieth century. Only one platform remains where once there were three. The change occurred in 1927 when the Up Fast platform and the island platform were demolished to make way for two additional tracks and the Down Slow platform was moved slightly south and made into the surviving island platform.2 Electrification of the first four tracks took place in 1928 and of the remaining two in 1955.3 On the western side of the King Street over-bridge the 1927 alterations included the resumption of Crescent Street. The 1886 quadruplication proposal had avoided the resumption in favour of the erection of retaining walls. In 1925 plans for the proposed quadruplication and extension marked Crescent Street to be resumed and the retaining wall and street were removed in 1927.4 An odd reminder of the 1927 works is the one terrace house which remains facing the railway line where Crescent Street had once been. The area in front of the house, ‘Duncraggan’, was resumed at an angle so it was necessary to remove part of the side garden wall to provide entrance to the front door.5 Funerals often left Newtown for Rookwood by rail in the late nine teenth and early twentieth centuries before motor cars dominated the profession. A mortuary station was provided at Newtown from 1875 with a

new building being erected in 1884. The building was located at the western end of the tram depot by 1907. A new platform was extended in 1927. The building was demolished in 1965.l The trams which originated at Newtown were popularly known as the “Green Lines” because green symbols were displayed on the end destination rolls. From the last day of 1881 steam trams ran from Newtown Bridge via Enmore to Marrickville, the line soon being connected to the Parramatta Road junction and thence to Bridge Street, Sydney. Rolling stock was kept on a railway siding at Newtown. In 1889 the line was extended to Dulwich Hill. In 1891 a line opened to St. Peters Bridge which was changed to a horse-tram in 1893 because not enough people used the tram in those depressed times. Steam trams did not replace the horses on this line until 1898. At the same time a through service from Bridge Street was introduced on this line.2 The steam trams would puff away and if the doors weren’t closed the passengers would get covered in soot.3 In 1899 it was decided to convert the Newtown Lines to electric traction and so the Newtown Tram Depot was built in 1900. The Newtown Chronicle reported during trial runs that ‘everything was found to work smoothly.’ Electric services commenced on 1st April 1900 with steam trams being withdrawn on 20th August. Power was generated at the Depot.4 In 1900 a line was opened from St. Peters Bridge to Cooks River. In 1909 the Addison Rd. line was opened to Dulwich Hill and in 1912 the line to Undercliffe opened. Lines from Dulwich Hill to Wattle Hill and Marrickville to Cooks River opened in 1913 and 1917 respectively.5 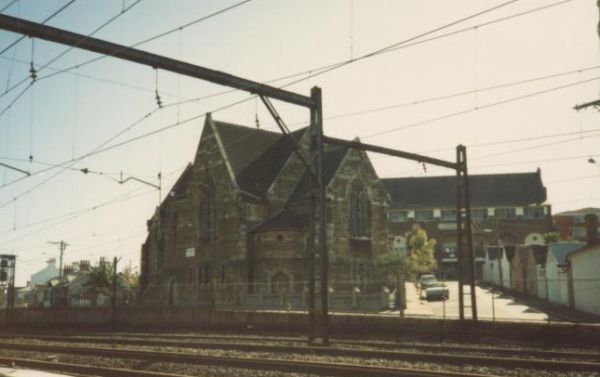 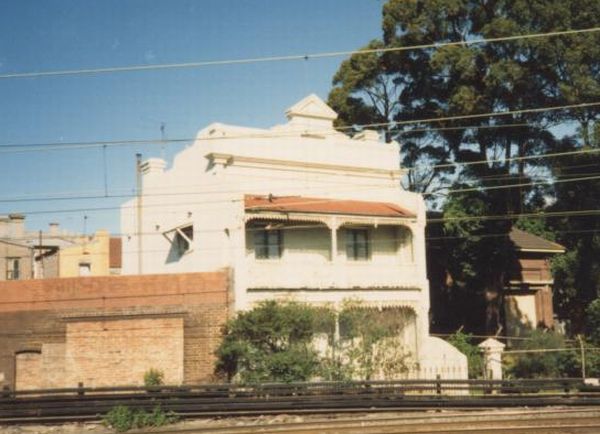 Plate 49. The only house in Crescent St. after the resumption in 1927. The parapet bears the name ‘J. MILNE’ and the house was called ‘Duncraggan’. James Milne, J. P., was a plumber and sanitary contractor in 1891. 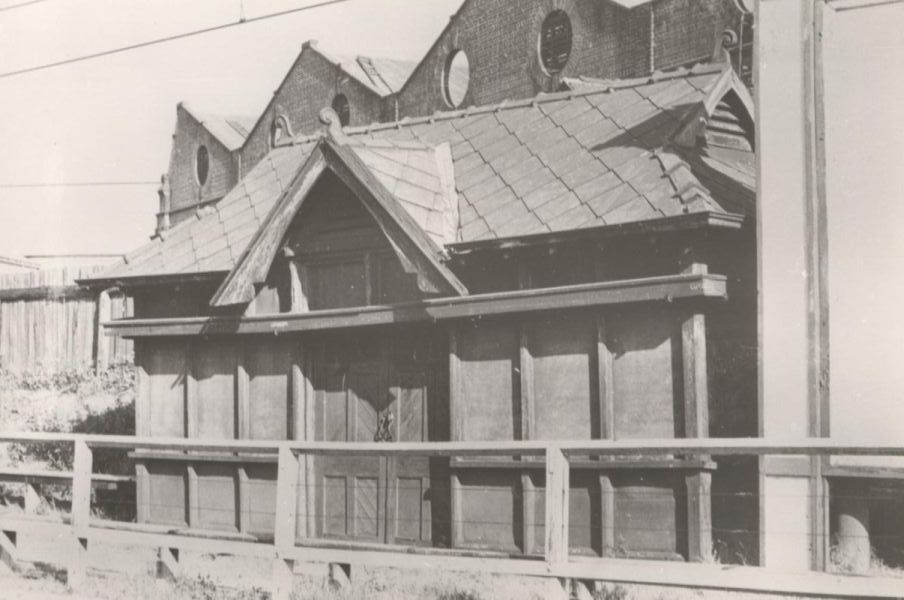 Plate 50. Mortuary Station near the Tram Depot in 1965 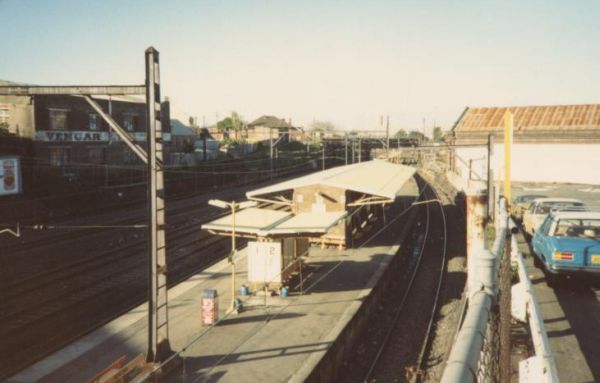 Plate 51. Newtown Station after the 1927 alterations. 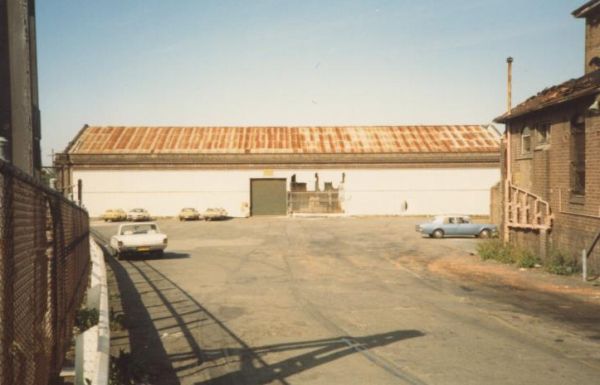 Plate 52. Newtown Tram Depot, built 1900. Note the tram tracks visible beneath the road leading into the 16 lines numbered along the building. 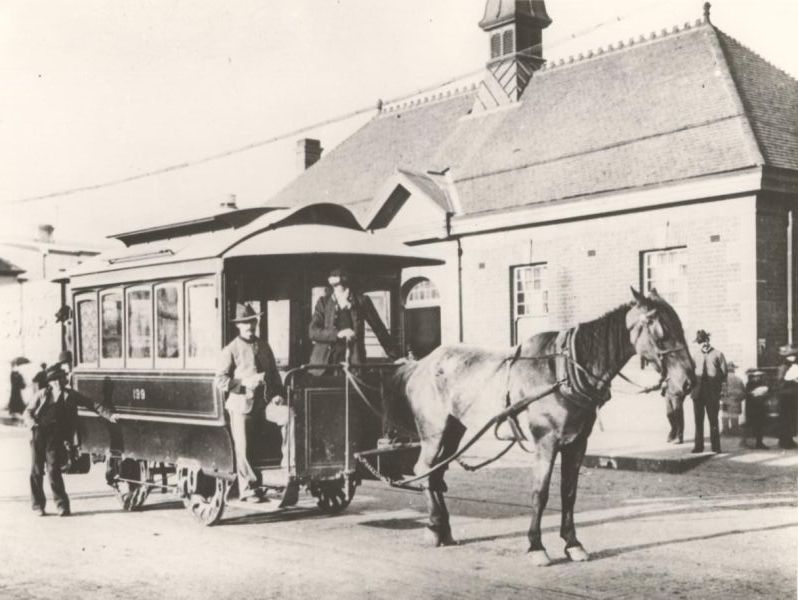 In 1911 the Newtown Depot had a capacity for 96 cars and an allocation of 138 so Tempe Depot was built to relieve the situation.1 In 1922 the Newtown Depot employed 420 men with 107 tram cars which travelled 43, 000 miles and carried over 50, 000 passengers every week.2 Trams ran in Newtown until 1957.3 A motor omnibus service was provided from 23rd April 1906 from the Enmore terminus to Wardell Rd. Lewisham. Unlike the trams which had regular stops they stopped anywhere as required by passengers. The double-deck ‘buses were built by a Newtown firm, Angus and Son. The service was discontinued on 29th May the same year because the condition of the roads meant passengers rarely wanted a second trip. Clouds of dust followed the ‘buses along their route and the ‘buses soon fell into disrepair.4 In 1922 it was reported that ‘buses were again running’ from the railway to almost every suburb, and it looks as if the trams will shortly have to take second place.5 Other forms of transport included horse-drawn vehicles, bicycles, motor cars and walking. Many businesses had their horses and carts and lorries and the livery stables supplied sulkies and hansom cabs which were too expensive for many residents. Double-deck ‘buses drawn by two horses ran from Newtown Bridge in the late 1890s. The drivers would yell out “all the way to Hyde Park threepence.” The ‘buses were open on top so if it rained you got wet. Special ‘buses ran to the Show via Cleveland Street for 3d. There were also horse ‘buses to Coogee Baths.6 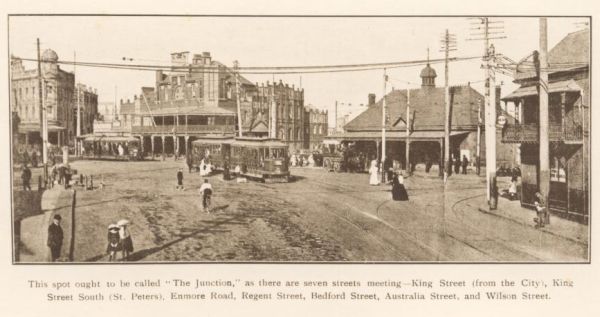 Plate 55. King St. and the Bank of Australia and C. B. C. Bank, Two cars, a cycle, a tram and two horse drawn vehicles.

In 1911 there were five cycle builders in Newtown, one of whom doubled as a honey merchant.1 Only a few people seem to have had motor cars at this time. Newtown’s Streets obviously weren’t designed for motor traffic. A bill for the registration of motor cars did not come before parliament until 1909.2 Walking was an important way of getting around. One resident recalled how she walked everywhere. The tram from Newtown to Grace Bros, cost only 1d. but she could walk there for nothing.3 We have seen how the railways and tramways changed the face of Newtown and provided a means for those living away from the inner city to travel to work. While there were a few motor cars in Newtown most people used horse-drawn vehicles, trams and trains to get around or they took the time to walk. It may be that 1927 marked a low point in Newtown’s history when the suburb was no longer considered important enough and its impressive Station was sacrificed to the transport needs of the areas beyond.