Joseph Mitchell was born in Birkenhead, Cheshire, in July 1840, and during the 1850s he completed an apprenticeship with a shipbuilding company. He arrived in NSW in or about 1860. His wife was Charlotte Harrison of 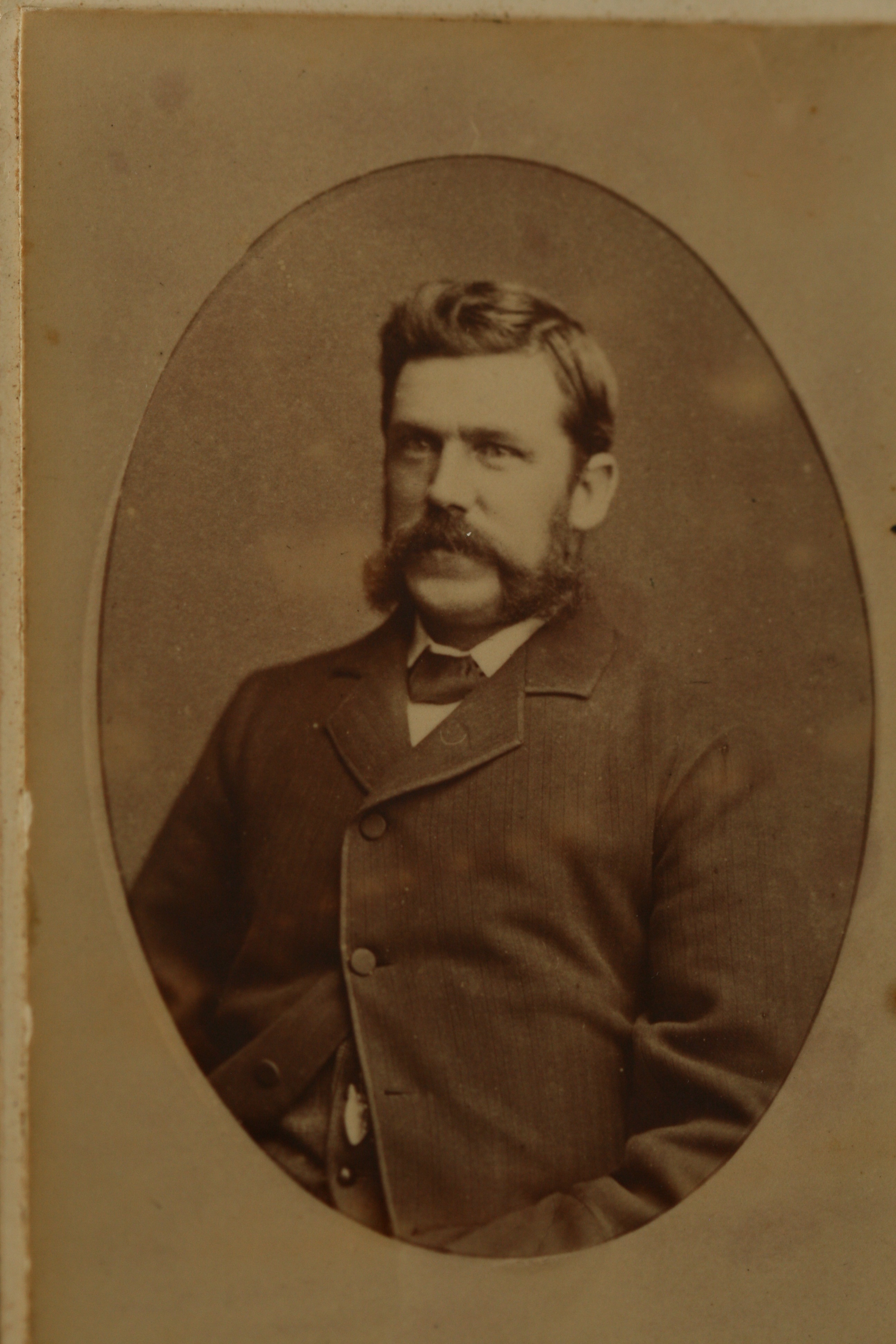 Bowral, she had been born in Holme Hale, Norfolk. They married in 1866 and lived in Bowral, Bathurst, Woolloomooloo and Pyrmont before making Newtown their home. Their first home in Newtown, 1 Windsor Terrace, Enmore Road, was rented from Mr Henry Holdsworth [Assessment Book for 1878]

For a little over a decade they lived in Simmons St, in the house now identified as 1 Simmons St. On 12 August 1878 the Council received a letter from Joseph Mitchell requesting that kerbing and guttering be laid outside his house in Simmons St and offering to pay part of the cost. [SMH 6.9.1878 p.3]. Given that he was a man of action, I’m assuming that the family moved there in July or even in the first week of August.

The house is identified from the map on Newtown Project website showing lot 31 and that lot number also appearing in the Assessment Book for 1879-80. Further, a For Sale advertisement for Richmond Houses in 1884 includes the selling-point that they adjoined the residence of Jos Mitchell, Esq, M.L.A. [SMH 19.4.1884 p.15]. Richmond Houses are also still there.

The Mitchell children were born in a number of places: Violet in 1867 and David 1869 in Bowral, Martha 1870 in Bathurst, and Florence 1877, Alice 1879, George 1881, and Gordon 1885, these four all born in Newtown, the last three in Simmons St. The youngest child of the family was Lillian, born soon after they left Newtown.

There were also three little boys who didn’t live long enough to have a home in Simmons St: Richard born 1872 in Penrith, Joseph born 1875 and John born 1876, both registered in Newtown.

Violet Cottage was the name given to their home, obviously named for their eldest daughter. It had three bedrooms, so with two adults and seven children they were a little more cramped than we expect to be today, especially assuming the four sisters aged from 21 down to 9 years by the time they left Newtown had to share a bedroom.

Violet Cottage contained a sitting room, parlour, dining room, kitchen, three bedrooms, two offices, and a wash house. It’s intriguing to wonder why Joseph had two rooms described as Office. Two inventories taken in 1886 list the contents of each room, as below  [SRNSW Insolvency File no. 20925].

Office: office table, 3 chairs, letter press and stand, washstand, iron safe, paper basket, oil cloth, ?op (These are the July lists for the offices; there are fewer items in the December lists for them.)

How did Joseph support his family? Before moving to Sydney, he had done a number of contracting jobs. These included being Government inspector of the sleepers used on the railway line under construction at Mittagong, erecting the teacher’s residence for Bowral Public School, laying the timber decking on the Denison Bridge at Bathurst, and supervising sleeper cutting at Cooranbong near Lake Macquarie.

Sometime during 1872 he started a wood and coal yard at Cowper Wharf, Woolloomooloo. However, he had to sell his horses, dray, weighing machine, and other equipment necessary for that business to pay debts incurred during the Denison Bridge and sleeper cutting contracts. One such debt was for a ketch ‘Tim Whiffler’ which was lost on its way from Sydney to Lake Macquarie before he had finished paying for it. After that, he may have worked as a clerk for a while, but no definite information has yet been found for that period.

In 1877 J. Mitchell, presumably this same man, had a fuel yard in Newtown Rd. Next, he had a wood and coal yard in Station St, Newtown. The property was rented from John H. Smith who lived next door. I think it also adjoined Warwick Hall. This shows in the Assessment Books for 1878 to 1884. During this period he expanded to having fuel yards in the city, at 34 Druitt St and in Hay St. Sometime during 1884 he apparently sold the Station Road business to Lindsay Browne. Mr Browne’s name appears in Assessment Books as occupying and owning a house in London St, Newtown, and also as the fuel merchant in Station Rd from 1885 onwards. (Note that his name has been transcribed as Bunn a couple of times.) From 1881 Mitchell started to buy ships for his coal business, and he gained contracts with a number of shipping lines to supply coal to their steamships. My assumption is that the coal yards closer to the harbour were better suited to his new venture, whereas the Newtown yard would have supplied the local homes and businesses. We know his local business customers included Fowler’s pipes, Petersham bricks, Elliott Bros glass, Bell’s fellmongered wool, and the Royal Hotel. If you look in The Sydney Morning Herald on 25 April 1877 page 2, and in a number of other issues in April and May that year, you will see Mitchell’s advertisement, the names of those customers incorporated into a 40-line, 5-stanza rhymed verse.

A number of other purchases and shared purchases of ships followed ‘Woodbine’ during the 1880’s, including ‘Mary Alice Doran’, ‘Mary Evans’, ‘Hero’, ‘Chieftain’, ‘Bride’, ‘George Thompson’, ‘Albion’. Remember, he was a shipwright and perhaps he got carried away by a love of ships. He was also extending his coal interests and had shares in some mining and other companies. By 1886-7 his debts exceeded his capital, and whatever ships he still had at that time had to go.

However, in November 1887 he went into partnership with Frederick Woolcott-Waley. Together they built up a strong business as coal contractors and shipping agents. They bought as colliers ‘Currajong’ and ‘Egmont’. (‘Currajong’ was later sunk off Bradleys Head, and you ride more or less over the top of her when riding on a Manly ferry.) They leased the Bellambi Colliery which had been idle for nearly three decades and re-developed the mine, built a jetty, railway, and everything necessary to operate the mine. They could not do this without a great deal more capital than they had, but were able to interest a number of capitalists in the project and subsequently Bellambi Coal Company was registered in Melbourne in September 1888. But Bellambi Coal Co is another story. Suffice it to say, that as his time was now spent in developing the mine, Mitchell and his family moved to Bellambi and were there in time for the birth of Lillian in January 1889.  It was at Bellambi that Joseph Mitchell died in October 1897, aged 57.

Leaving the coal theme now, and returning to Newtown. Joseph Mitchell stood as a candidate for the Legislative Assembly in 1880. He was not elected that year, but was elected in 1881 and several times thereafter for Newtown and later for Illawarra. The Sydney Morning Herald carried reports of candidates’ electoral meetings and speeches. He was introduced by Alderman Elvey as a man of integrity, industry, and perseverance. He was a believer in free trade, and stood for the 8-hour working day wherever possible, tramways, education for the masses, amendments to the marine laws, cheap land for farmers and increased road and rail infrastructure into rural areas to facilitate rural development, a rail line from Redfern to Circular Quay and trains with timetables and fares that suited working men so they could move their families to the healthier suburbs, more parks and recreation grounds, improvements to main roads and railway stations. He opposed the Protectionist stand which meant that everyone paid higher taxes to benefit a few, the gas company monopoly, tolls, and unrestricted Chinese immigration because wages of Australians would be undercut. He contributed to the dissolution in November 1882 by being one of a few to speak and vote against the government on the Land Act. Robertson’s Land Act of 1861 had originally done a lot of good, but was now being abused by monopolists and needed amendment.

When at his first electioneering speech in 1880 he mentioned the 8-hour day, someone questioned him with, “Why do you not carry it out?” He responded that people such as the questioner would be the first to sing out if he closed his coal yard at 4 o’clock, but that he did give his men holiday pay and sick pay. On another occasion he mentioned that he had initiated half-days on Saturdays.

That first speech was in Newtown Town Hall, but many election speeches were made from the balconies of hotels. It was the days before microphones. One report mentioned 1,200 people gathered to listen.

Leaving Newtown. From his connections in the western districts in the 1860s, Mitchell had begun to develop an interest in the iron and steel industry. Over the years this interest increased as he gathered information and his opinions firmed. From about 1889 he was pushing parliament to help get an iron and steel industry established in NSW. He gave a number of public addresses about the importance of this industry for Australia, and explained the reasons why earlier endeavours had not succeeded. He made three trips to Britain, in 1890, 1891, and 1896-7, to gain financial backing for such an enterprise. His proposal to set up an iron and steel works and supply the Government with rails was eventually accepted by Cabinet. But they had delayed too long. Before Parliament could ratify that decision, Mitchell had died. It was almost another decade before William Sandford got the Lithgow ironworks operating, and that business was shortly afterwards bought by George and Charles Hoskins and later moved to Port Kembla. Some, however, remember Joseph Mitchell as a pioneer of New South Wales’ iron and steel industry. [McKillop, p.93]

Joseph Mitchell Place, Woonona, is named after him.

The Argus (Melbourne), accessed on National Library of Australia’s Trove