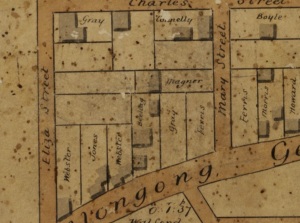 In nearly every written history of Newtown, John Webster, a local merchant, has been credited with providing a name for Newtown. It is reported John Webster operated a store from the early 1830s on King Street between the centre of Sydney and the Cook’s River. He called it the ‘New Town Town Store’ to distinguish it from the older established settlements of Cook’s River and Camperdown. It is generally described as being located on the corner of King and Eliza Streets.