Reminiscences of my growing up in Newtown

My connection with Newtown starts back in 1853 when my Great Great Grandparents Daniel & Mary Jarman came from Ramsgate in Kent and settled in Newtown. Their rather large family followed over the next five years and led to an extensive Family spread all over Australia. My Grandfather, Daniel Richard Jarman, was born in Newtown Road (now City Road) in 1861. He married in Newtown before moving to Burwood and starting his large family. 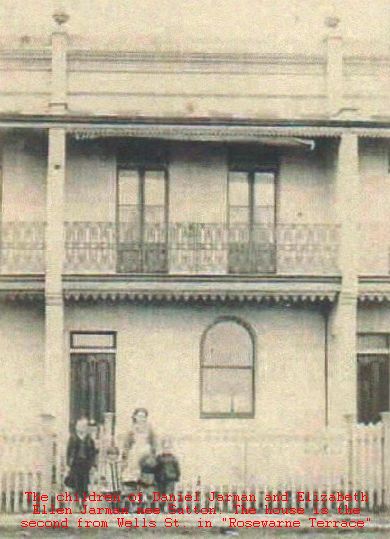 My Great Grandfather’s brother lived for quite some time in Rosewarne Terrace in Commodore Street, Newtown. My Great Grandparents died in Garden Street, Darlington.

My Great Uncle, Stephen Jarman, had a rather large building Co, and another Great Uncle worked on the building of Anthony Horderns with his nephew as an apprentice.

Many Jarmans lived in and around the Newtown and Marrickville area for many, many years. There are quite a few family members buried in St. Stephens Church grounds. (Jarmans, Austins etc.)

Now I come to my time in and around Newtown/Camperdown.

I was born in 1939 and lived in 1 Hopetoun Street, Camperdown with my Mother Father and 7 siblings.

Newtown was the nearest shopping and entertainment area which I remember with much fondness. I remember shopping with my Mother on a Saturday morning. Some of the shops were Moran and Cato where the biscuits were sold in brown paper bags, butter by the 1lb patted into shape by the counter assistant with two wooden pallets, Sutton Forest the butcher, Belle Starr the best dress shop in Newtown, Quartleys the hardware store, Mansfield furniture shop, Miss Amies baby shop & of course Brennans where my Mother always had something on lay-by, Mick Simmons sport shop, a great deli, Brownings, next to Wood Coffill’s florist on the corner of Church Street, the newsagent on the corner of Wilson Street and of course the wonderful shoe shop whose name I can’t remember but they had a sign in the window which went….”I complained because I had no shoes until I met a man who had no feet…” that still stays with me. June Russell’s Hairdressing, Ron Bennett menswear, Blue Ribbon cake shop, The Star Milk bar, The Waratah Milk bar, which had 2 shops, one next to the railway station and the other next to the Oxford Tavern in King Street, McIlwraith the grocers, McCathies Lingerie Shop and of course Washington R. Soul Pattinson, before they changed their name to Soul Pattinsons. Last but not least, Le Maire Photo Studio in Wilson Street, there were only two Banks that I remember. They were The Commonwealth in King Street and The Bank of New South Wales on the corner of Australia Street next door to the Court House and Police Station.

I went to Camperdown Public School and had a great life in and around the area; going to the pictures Saturday afternoon at the Enmore Theatre and The Hub with my sisters maybe Friday or Saturday nights. When I got a bit older, dancing at Keatings Ballroom above Newtown Railways Station and of course Surreyville Dance Hall in City Road.

My first job was with Coles in King Street, the top Store next to the Star Milk bar.