On not belonging: Memorials and Memory in Sydney 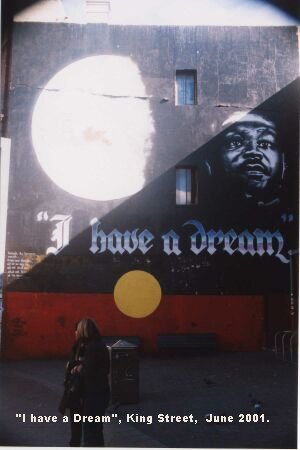 There is a memorial plaque on a seat – one of many – at the Sydney harbourside suburb of Manly looking out to sea. It says: “In memory of Mary Kalezic who loved this place”. This message speaks about an individual’s bond with a physical site that is direct and moving.
Another memorial in the Inner Western suburb of Newtown is painted on a wall. It is at the less salubrious end of the area on a main traffic thoroughfare in one of the most congested streets in the city.

Adorning a whole wall in bold colours, it is impossible to miss. It bears the classic realism of the spraycan artist. There are two images: the Earth, and the face of Martin Luther King, both stark against a black background. Underneath are the words ‘I have a dream’. Across the bottom third of the wall is the Aboriginal flag and the injunction: ‘Please show respect, post no bills here.’ But despite this mural’s visual accessibility and prominence it is often viewed ‘in a state of distraction’-as opposed, for example, to the intense focus when in a museum- because it is part of the public streetscape of buildings, shops, people and cars. It is arresting, but becomes part of the urban visual wallpaper.

Memories embedded in buildings like this one acquire meanings different from those the architect intended, and the mural obscures any sense of the three storey building underneath it.
Before investigating the history of this mural, we were completely mistaken about who made it and what it was designed to do (as were many others consulted anecdotally). To most it presents as though it was painted in the 1960s and represents the dispossessed indigenous Australians seeking a link with African Americans-a kind of pan-black nationalism, most importantly, with its history of civil rights struggle and Martin Luther King’s vision for black equality in a multiracial future. Unlike the Cabramatta example, one does not perceive the mural as an identification with the Australian or American understandings of nation. But the juxtapositions on the wall of the Koori flag and the painting of Martin Luther King conceal an important difference between these groups. Australian Aborigines are indigenous peoples while African Americans are immigrants. So these two groups are now positioned very differently in both national and international discourses on race, and the message seems old-fashioned.

When Martin Luther King gave his original speech in 1963 it was a moment in time specifically addressed to Americans to make their nation ‘whole’-pluralist yet united-and overcome the divisive heritage of slavery. While it became a broader symbol in the 1970s of a diffuse black nationalism, King also spoke to whites in the USA and garnered their support, as is the intention of the Newtown mural. 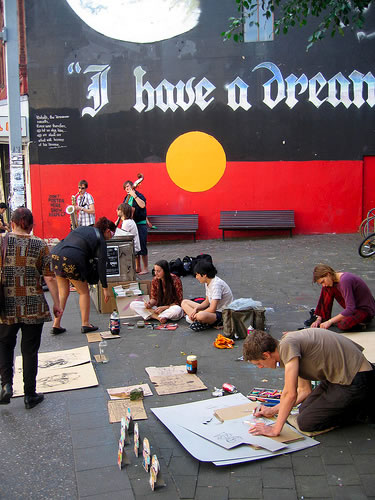 This monument communicates a longing (though not necessarily the one intended) for a sense of being part of something larger than oneself. It was in fact designed and spray painted by Andrew Aitken, Juilee Pryor and other members of Unmitigated Audacity Productions in 1991. Andrew Aitken, now serving a life sentence for murder in England, was the chief creator. It was completed over a period of twenty-seven hours using a cherrypicker donated by a local businessman and $1000 worth of paint. In its original form, there was no Aboriginal flag on the bottom, but a group of people looking up at King. The flag was painted sometime later (accounts vary between several weeks and years); it is not known who made the link between these groups by painting it. Once the indigenous flag was painted on the bottom, the message became ostensibly linked to a particular community within Australia, where previously it imagined the world at large as a ‘community’. In fact, the graffiti artists claimed it was designed to counteract the ubiquitous commercial imagery in the city and to foster Christian and humanist values. Though erected without council permission, the police called to the site during the night endorsed the painting and the council has let it remain, despite subsequent campaigns by them in conjunction with commercial groups to get rid of it.

Some have argued that when art remains accessible, it can be an important counterforce to official memory or monolithic public myths. Art, it is argued, can be more effective in ’embodying’ historically specific ideas than history-writing. We are not convinced that this is the case with the Newtown monument. To many in their twenties and thirties who live in Newtown, the face of Martin Luther King is not instantly recognisable, and it may speak more to a generalised history of protest identified with Newtown than any specific message about indigenous rights.

A collection of photographs by Juilee Pryor, a member of Unmitigated Audacity Productions, have recently been added to the City of Sydney Photographic Database, ArchivePix – http://www.photosau.com.au/cos/scripts/home.asp.  To view the Juilee Pryor collection search using the keyword “Juilee”.