Growing up in Newtown in the 50s and 60s 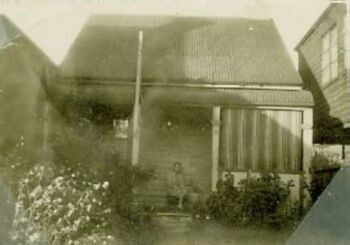 I grew up in Burren Street Newtown. My father worked as a sheet metal worker in a factory at Rosebery and my mother worked as a cleaner at St. Andrews College, Camperdown. There were two original bedrooms in the house with a small bedroom at the back of the house and another on the front verandah after Dad enclosed the front verandah and converted half to make a bedroom.

There was an outside toilet and a chip heater in the bathroom. We had a small backyard with a garage at the back. There was a laneway behind Burren Street (Pine Lane) with access to the garages at the back of the houses. Mum had clotheslines with props holding them up. She didn’t like the steam trains, their soot always ended up on her washing.

My sister can remember us having chickens in the back yard but I can only remember the coop. We had a long front yard and we used to hit tennis balls on the side wall that ran along our yard. We did it for quite a while and had a great time until the neighbours complained of the noise and rightly so, we forgot it was the wall of their house! After that we started playing shuttlecock along our path with a string across as a net. To go swimming locally we would walk to Victoria Park Pool. My friends and I used to go to Hollis Park in Wilson Street to play on the swings.

The Stuckeys lived across the road with the Carters next door and the Churches to the right of them. To the left were Jan and Neil and their young family and then Mrs Wright, an elderly lady. Mrs Wright’s old house and Jan’s and Neil’s house are not there anymore, it is now a car park. To the left of our house were the Cheungs. Mr Cheung was Chinese and Mrs Cheung was Australian. Mr Cheung cooked in a Chinese restaurant. They had 6 children. To the right were the King Gees. They were Australian and had about 5 or 6 children. The Junos lived a few doors up, there were 3 children there. Frank Strain, who owned the Bull & Bush, lived in the last house across the street before the station. Mrs Sinclair lived somewhere in our street as well, she used to give us lollies.

There was a lane beside Macdonaldtown Station that used to run down to Burren Street. On my way home from school I used to run down the ramp that was near the station, across the laneway and up a few steps to the other side of the street and hope no cars were coming out of the lane.

Dad was a big fan of the South Sydney Rabbitohs and he took my brother, my sister and me to see the matches at Redfern Oval and Henson Park on a Saturday afternoon. Mum used to stay home mostly, to get a rest I think. This was in the 60s when the team was at its best.

There used to be a half-height red telephone box on the corner of Burren & Wilson Streets coming from the city. Your legs were exposed to the weather but your top half was covered and it had the old phone in it with the round dial and the heavy receiver plus the box for the coins with the A and the B buttons on it.

The green and cream 300 single decker bus used to run from the opposite corner of Burren Street to Broadway. We used to shop in the City but occasionally went to Broadway. We went to Grace Bros Broadway to have our Christmas photos taken with Santa. On the corner of Watkin and Wilson Streets there has been an antique shop but my brother can remember it being a bakery (Henry Henninge’s) with a horse drawn cart and it had stables attached. Further along Wilson Street was Ern McQuillan’s Gym.

Brennans was the largest shop in King Street Newtown with another entrance in Wilson Street. When the shop assistants made a sale they used to put the money into a capsule and they had a chute that would send the capsule up into the office – that always fascinated me as a child. The entrance from King Street was clothing and haberdashery and downstairs was hardware and paint with an exit to Wilson Street. On Prendergast’s Corner there was a newsagent’s shop. There wasn’t much shopping at Newtown then. It was mainly food shopping and quite a few ladies’ dress shops such as Paula Clarke and Glamour Girl. It was exciting when Coles’ big store opened; it was where the Dendy Cinema is now.

My sister used to go to a dancing school above Newtown Station. There used to be weekly markets beside the Station where the old tram depot was. We used to walk to the pictures at the Hub and the Enmore Theatre to see family movies. My sister said there once was a cinema where the library once was in King Street (The old Burland Hall. The library is now in the old Salvation Army building in Brown Street.). One school holidays I saw Little Pattie in a live show called The Ugly Duckling at the Elizabethan Theatre (at the corner of Wilson Street and Erskineville Road). It was a beautiful theatre.

There seemed to be lots of children around. Also migrant families. I attended the Catholic primary school at Erskineville with Maltese, Italian, Greeks, Yugoslav and Aboriginal children. My best friend in primary school, Judy O’Sullivan, lived in Watkin Street Newtown.

I went to High School and eventually to work in town and travelled by train. The old red rattlers were always crowded and, on my trip home, I had to push my way through to the doors and usually I was the only person to get off the train at Macdonaldtown Station. I used to travel home on the train with friends from School who lived at Summer Hill; I used to feel sorry for them because they lived so far out! I was 10 minutes from town and they were 20 minutes.

My parents are both dead now and the house has been sold; thus ending our family’s 53 year association with the house in Newtown.