Grace Schwebel was interviewed by Sue Rosen on the 16 July 1995. Grace was born in Angel Street Newtown in 1916.

You can listen to the audio of her recollections, both happy and unhappy, of being a child in Newtown in the 1920s.

Firstly, her memories of attending Jewish celebrations in Newtown. 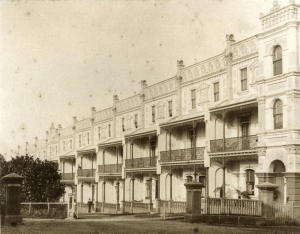 “In Georgina Street nearly every house was a Jewish family”

Transcript: There was always a lot of activity going on in that little area. The Jewish, the Synagogue….see their Sunday was Saturday, and they always had their weddings on a Sunday and before you went into that particular area where the Synagogue was, and some down into Georgina Street and Lower Avenue, they used to call it Lower Avenue, they call it Warrenball today, there were these lovely great big wrought iron gates set on this nice sandstone, and they had these lovely Morton Bay fig trees. And kids, we would all love to go down there and watch the, the Jewish weddings and we wew fascinated that the men wore their bell toppers, you know, their nice silk toppers to go into the, into the Synagogue  in the church and all that. And then they would come out and next to the Synagogue there was this lovely hall, hall there that they have, where they’d have their bar mitzvahs and all that. Now I would say that in Georgina Street nearly every house was a Jewish family, and when, when their, their festivals came on and they, we would get all their, their Jewish food and kids would go in and get them and come out and eat the bread and their parents were generous and they, and there was an exchange of food all the time, there was always an exchange of foreign food, like ethnic food, we didn’t know what we were getting, now we look back and thinkGod it was a great, great time, you know. No hostility, everybody tolerated everybody else. hostility

She also shares her memories of sad times when infectious diseases in Newtown claimed the lives of children.

Transcript: There was always sad times when one of the children , one of the chldren took very ill and was lingering for quite a while, and on the lamppost they would have flags at the top of the street and down the bottom of the street , they would have these sorts of flags on the pole to denote that there was a child dying there, and if possible not to take the horse and carts and buggies or anything down the street unless they could go around the next street, not to go past that house where that little child was dying, it was very sad. And when she’d died and laid out out in the coffin, everybody was taken through to walk past the coffin and, and pay their respects. And I got, I was horrified, I screamed and I was taken to have a look at her, and it frightened the daylights out of me, this horrible thing, to see this dead child in a coffin. But that was the practising custom of the day. I would say it was a contagious, infectious disease because noone was allowed to go near the family either, although they would sing out to them acrosss the road, no, no child was allowed to go into, into the house, it would be because it was very infectious. well, it was a red flag and it denoted danger, I s’pose, and there was probably another.. they were just like flags on a pole and just putting out, it’s very symbolic that there was something going on in that house.