Bumper Farrell was a legend twice in his lifetime. 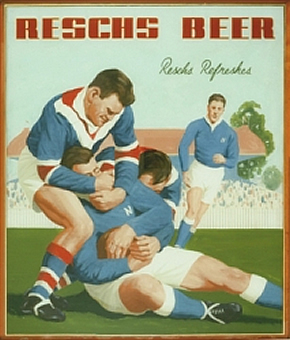 He was a copper who worked the street in Redfern, Newtown, Chippendale and the Eastern Suburbs, dispensing his brand of policing on his way to the Vice Squad and a senior post in the NSW Police Force. Many people swore that Bumper’s not-so-friendly clip under the ear and stern message to “get home” after being sprung in some minor infraction of the law stayed their feet from climbing the ladder of crime. Not to mention kept them away from the courts and jails they could otherwise have found themselves in.Easts Vs Newtown

And he was a rugby league legend, the captain the Newtown Bluebags when they won the NSW Rugby League grand final for the third and last time in 1943 against a North Sydney captained by former Bluebags player Frank Hyde.

Being a country lad who came to Sydney in his late teens I knew nothing about Frank Farrell for quite a long time, until I had managed to get the then huge Sydney brewing concern Tooth and Co to allow me to bring a professional photographer into the Kent Brewery and photograph the glass pictorial ads they had preserved there and elsewhere and reproduce them.

One of the pictorials I reproduced is this one featuring Bumper in an Easts jumper tackling an unknown Newtown player in what would be in today’s game an illegal tackle. Not that Bumper would have noticed or probably even have stopped doing. Tooth & Co also showed a sense of humour, commissioning this image for the outside of the Marlborough Hotel in Newtown, I think, which was where Bumper used to do his training every Friday night before the next afternoon’s match.

Tooth’s long-running ad series on the outsides of hotels focused on portraying life around the individual hotel, relating to the locals and gaining power because of these links. This image demonstrated all of that, as Bumper was held in high regard from the Newtown warrens to the narrow streets of Redfern.

Farrell was born on September 19, 1916 and died 69 years later on April 23, 1985. His nickname came about because as a high school student he smoked bumpers – discarded cigarette butts. He was a real southern suburbs boy, born in Surry Hills and educated in Redfern and Kogarah. 1938 was a big year for Bumper as he joined the NSW Police Force and started playing first grade for Newtown.

Newtown and Redfern, or if you want to be posh, South Sydney, were the battlers’ suburbs and their teams were the comp’s battlers’ teams. Newtown did not have the success that South Sydney had in amassing premierships, running in only three before the Bluebags dropped out of the top echelon of football but it was a bit hard to blame Bumper.

In 1942 he became Bluebags captain and the following year took them to premiership victory 34-7 over North Sydney, led by a former Newtown player, Frank Hyde. Bumper even scored a try. The next year he took Newtown to the grand final again but, alas, no victory. Under his captaincy the Bluebags made it to the semis every year until 1948.

On researching for this piece I found I could no longer locate a story I had read which mentioned that Bumper had played two or three games for Eastern Suburbs before calling them a bunch of silvertails and going back to his heartland at Newtown. After being pursued by a senior Easts administrator he apparently signed a contract with Easts to play for a season but tore up the contract after just two or three games and went back to Newtown. Can I find this piece again? No way. However, recently a bloke who saw this image of Bumper in an Easts jumper said his father or uncle was the publican of an Eastern Suburbs hotel, in Kingsford I think, which had this image on the outside wall about 30 or 40 or 50 years ago. So, who knows… Just another piece of scuttlebutt? or was it true? Just add it to the legend of Bumper Farrell.

The series of old Tooth glass pictorials of which this one of Bumper was one gave us a view of what Sydney and the state looked like from 1929 when they began, right through the Depression, World War Two and our post-war reconstruction and rise in prosperity until Tooth stopped having them painted in the early 1960s. The pictorials changed with the times, giving us an unparalleled record of Sydney and the state in colour through four tumultuous decades. The artists painted everything from horse riding in Centennial Park to sailing on Sydney’s glorious Harbour to a view of Clifton near Wollongong to racing the wrong way at Canterbury to harvesting wheat in the state’s hinterland. These paintings of a state at play and work in full colour were a unique record. The palm trees behind the riders in Centennial Park would now tower over horse and rider and the cliff face has come right up to the back of the Imperial Hotel at Clifton. In the early 1960s when these ads were being phased out truckloads were sent to Tempe Tip and destroyed, depriving us of these irreplaceable images. We are lucky that these images remain.