Biographies of the Early Aldermen 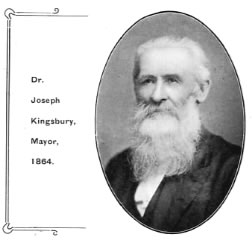 Arthur Crocker writing in the Municipal Diamond Jubilee Souvenir (p.76) says Dr Joseph Kingsbury had a ‘very extensive practice and was noted for his great skill’. He was a member and preacher of the religious group known as the Disciples of Christ which commenced in the area in 1852. He preached at meetings of worship in his house and later at the Christian Meeting House in King Street (demolished for the Bank of New South Wales).

He and wife Sarah had a child called Joseph in 1845. Their house, located between Francis and Juliett Streets in Enmore was still standing in 1912 (Municipal Jubilee Souvenir p.79). It may have had a driveway running to it as the 1867 edition of the Sands Directory gives his address as being on Kingsbury Lane. The cottages of both Kingsbury and Holland were both situated within the 22 acre estate owned by Joshua Frey Josephson MLA (1815-1892 see cross reference). In fact Josephson wrote to Council in February 1865 stating that both were to be separately assessed for rating ‘yet so nevertheless that the present amount shall not be exceeded’. The Council had to deliberate on this matter as it involved a question as to whether Kingsbury and Holland had the right to vote at the ensuing election.

Randolph Bedford’s 1944 childhood memoirs describe Dr Kingsbury living in a ‘highly respectable street of churchgoers’ and keeping Polish fowls. The Council minutes of 13 November 1865 give a picture of the rural nature of the place. Five councillors visited when neighbour Frederick Holland complained of filthy pig-sties, offensive cows and a boiling-down works (used to boil cattle carcases for tallow, see 19 September 1882). They found well-drained, several cows in sheds, a horse in the stall and four pigs in two sties without offensive matter in them. They examined a boiler, which Mr Kingsbury said had not been used for four months, and were required only for hot mashes for the cows. They examined the land between the neighbours planted with fruit trees and saw nothing offensive, but there was a very filthy sty and two not particularly clean pigs at the rear of their common fence. Kingsbury admitted that there may be an offensive smell sometimes during wet weather, due to the drainage from several water closets and the pigsties above his garden, which caused him to discontinue its cultivation.

He signed both the 1859 and 1862 petitions to the Governor to form a municipality. Both he and Holland campaigned as councillors representing Enmore ward in the first election, both speaking on the Tuesday night before the election at the Terminus Inn on the corner of Cooks River and the Enmore Roads opposite the School of Arts. Both were elected, Holland proposed Kingsbury as Chairman in the first meeting of the new council on February 16th 1863, but the eight councillors decided Holland would be the first Chairman.

Joseph Kingsbury was made the second Chairman at the second election on February 16th 1864. His year in office saw the Council first meeting in its ‘temporary’ council chambers within the School of Arts building in May, and its exercising of the by-laws in combating nuisances such as the house of ill fame in Hordern Street.

He acted as returning officer in the third elections, held in February 1865, to find his successor but there was criticism of him over legal confusion as to who was eligible to be included on the electoral roll. Kingsbury disclaimed any intention of acting in opposition to Council resolutions saying the Municipalities Act was so ambiguous that he thought it better ‘to allow these men to vote than prohibit their doing so’. There was quibbling then mockery from Councillor James Conley when discussing compensation for flooding.

Kingsbury held an election meeting at Terminus Inn in 1866 for the fourth election but was defeated by Frederick John Goodsell’s seven votes so in the following year he offered himself as candidate for Marrickville Council (Herald 12 February 1867). This was a moot point as Kingsbury lived on the edge of an ambiguous municipal border. A number of Enmore householders residing ‘in a portion of land lying between Newtown and Marrickville’ petitioned to be annexed into the wealthier Newtown municipality in October 1863. Newtown asked the Surveyor General in January 1865 and Marrickville Council in August 1865 to confirm the boundary line. That portion between Francis and Juliett was included with Newtown in 1874.

Joseph Kingsbury decided to stand again for Newtown in 1869 and this time he enlisted an armada of support from wealthy influential landholders with nominations from former rival Frederick John Goodsell, his ‘landlord’ Joshua Frey Josephson MLA, Thomas Holt MLC, CF Breillat, Samuel Kent, Rowland Hill and Richard Cozens [check; cross-refs]. This does look like a ‘clique’‹as Martin Gibbens complained> but James Conley also had a formidable list of nominees this year.

He was elected for his second term of office as Chairman/ Mayor in February 1871. A scandal occured on 24 January 1871 when an omnibus driver named Samuel Hugh[e?]s and who claimed to be ‘a sober man’ duped Kingsbury into obtaining his signature for self-gain (see Herald 17th). This resulted in a prosecution against the mayor at the Central Police Court on 27 June 1871.

Judge Josephson subdivided the land around Kingsbury’s home in February 1878. Edgeware Road was doubled in length and extended up to meet Enmore Road. Long rows of small ‘artisan’ houses replaced the large estates.

His congregation would be housed in a new large church known as the Tabernacle of the Church of Christ in Metropolitan Road Enmore in 1886; he moved his house and surgery to a sizeable building called Columbia Cottage (now a car park) in Church Street Newtown.

His death was registered at St Peters in 1902.

His son, James Kingsbury MD lived at Columbia Cottage in the 80s-90s, was an elder of the church later and on the municipality’s 1912 Procession Committee. We do not know if there is a link between these two Doctor Kingsburys and John Kingsbury who ran a drapery/clothier store on the main road in the 1870-80s (it seems his name and the date [1886?] can be seen on the parapet opposite the Congregational Church) and the John Kingsbury who was in the State Legislative Assembly in the 1930s.