Harold Street in Camden is mentioned in 1882 but the origin of its name is unknown.

Harrow Road in Enmore can be seen on an 1841 subdivision map, and coincidentally is the name of the school to which Joshua Josephson sent his two eldest boys in the 1860s. It was renamed Lynch Avenue after 1939, probably in 1948, so as not to duplicate Harrow Road in Stanmore.

Hart’s Lane is mentioned in 1883 but is not on twentieth century maps, presumably it was named for builder and alderman Peter Hart.

Hawken Street in Camden was formed in 1879, and spelt as ‘Hawkins Street’ in Council minutes on the assumption it was land owned by T. Hawkins, the builder who refurbished the Town Hall in 1869. However the spelling changed the following year. Nicholas Hawken (1836-1908) was born in Cornwall, a produce merchant who lived in The Gables on King Street, Mayor of Darlington 1881-1903 and representative for Newtown in Parliament 1887-91, author of ‘Power of Government, Poems and Catastrophe of God’, and pictured on page 82 of the 1907 Cyclopaedia. 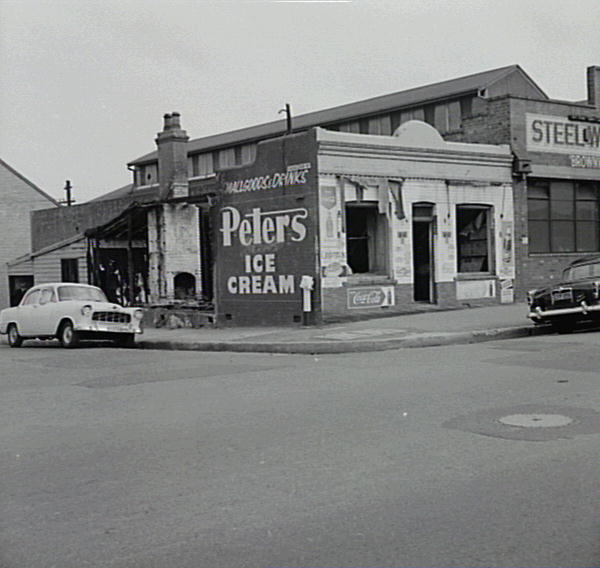 Henderson Roadwas formed in 1875 in Erskineville and named after the owners of the Camellia Grove Nursery there.

Hennings’ Lane in O’Connell; Henry Hennings ran a bakery here on the corner of Watkin and Wilson Streets; a wheat sheaf in stucco is still visible on the building.

Herbert Street is part of the Linthorpe Subdivision of 1905 (see subdivision map no. N6/141 at Mitchell Library).

Hibbles’ Lane was located between Bucknell and Watkin in O’Connell from 1882 and named after painter/decorator Alderman William Hibble.

Hill Street was opened below Wilson Street in O’Connell in 1882 to connect Watkin Street to the Macdonaldtown station, and renamed Watkin in 1885. It was named after owner C. W. Hill rather than Alderman Rowland Hill.

Hoffman’s Lane is parallel to Lennox Street in Kingston and mentioned in 1881. Frederick Hoffman (c.1814-1886) owned a bakery at Brickfield Hill in the city, lived at Lennox and Regent from the 1860s and was one of first members of Newtown’s Volunteer Fire Brigade. His son was also named Frederick and was Council’s Assistant Sanitary Inspector and Valuer in the early 1900s.

Hollis Lane in O’Connell is behind L’Avenue (now Warren Ball Avenue) and named after Alderman Robert Hollis who lived in Newman Street in the 1880s then in Wilson Street for 30 years.

Hollis Park in O’Connell is named after Alderman Robert Hollis; the top half was purchased on 4th June 1913, the lower half was gazetted on 8th April 1914.

Holmwood Street in Camden Ward was part of the Dickson family’s 1887 subdivision of their ‘Holmwood Estate’; the house was built in the 1830s (James Broadbent suggests it may have been designed by John Verge) and demolished in 1890.

Holt Street in Enmore was formed prior to 1863 and named after Thomas Holt, tycoon, Treasurer in the Colony’s first responsible government in 1856, MLA 1861-64 and resident in Camden Villa until 1856 when he built the Warren Castle at South Marrickville.

Hopetoun Street in Kingston Ward was formed in 1900 and named for John Adrian, Earl of Hopetoun, first Governor-General of Australia, 1901-02.

Horbury Lane exists in Kingston (or at least it did until 1939); see Horbury Terrace.

Horbury Terrace in Kingston was a street and a terrace built by Thomas Holt facing the railway soon after 1855. The street name was greatly extended and connected to Bedford Street after 1865. Thomas Holt built another Horbury Terrace, still standing in Macquarie Street Sydney; both are named after his birthplace in Yorkshire.

Hordern Street in O’Connell Ward was part of the 1845 subdivision of Governor William Bligh’s 1806 210-acre Camperdown Estate grant, and given to Council by Thomas Chalder in 1878. It was named after Henry and John L. Hordern who had a drapery shop opposite the Congregational Church and whose family owned much land around here until the 1920s. The initials for Samuel Hordern II can be seen on at least four buildings in the area.