Federation Road in Kingston Ward was named at the time of Australia’s Federation. Real estate agents Raine and Horne offered the Northwood Estate between Federation Road, Australia and Church Streets for sale in December 1900 and March 1901.

Ferndale Street in Enmore was formed and named in the 1880 subdivision presumably after the ‘ferny dale’ there, though others referred to it as swampland.

Flora Lane at the rear of Don Street in Enmore is first mentioned in 1883.

Forbes Street in O’Connell Ward was formed in the 1830s. Named for Sir Francis Forbes 1784-1841, friend to Governor Brisbane and virtual President of the Legislative Council, lived here at Lietrim.

Fowler Street was formed after 1880 and named after the family whose pottery works and chimneys dominated the Camperdown area.

Fowler Reserve in Camden named after Mayor Lilian Fowler MLA in the 1930s.

Francis Lane off Australia Street in Kingston is mentioned in 1882 but has not yet been located. 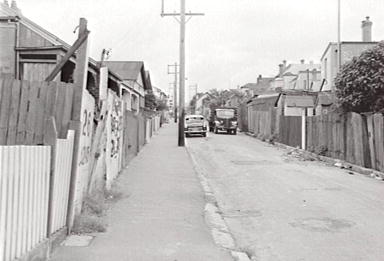 Francis Street in O’Connell Ward was formed in the 1830s and named for Francis Forbes up until 1869; see Forbes Street and Queen Street.

Francis Street in Enmore can be seen on an 1841 subdivision map and it has been suggested that it was named after Joshua Josephson’s son-in-law Francis Lindsay Barker but the dates need more research.

Frederick Street near Wilford St and Enmore Rd in Enmore is mentioned in 1885 but does not appear on twentieth-century maps.

Frederick Street in O’Connell appears on nineteenth-century maps near Sarah Square and is mentioned on p.124 of the 1912 ‘Municipal Jubilee History’ but seems to have been swallowed up in the remodelling of the Teachers College in the 1970s.

Fulham Street in Enmore is first mentioned in 1879.