Cambridge Street in Enmore was first mentioned in 1865.

Camden Street in Enmore was named in June 1865, and previously known as Bowen’s Lane, Bourne’s lane and Campbell Street. Thomas Holt and the Congregational Church formed a theological college on 12th July 1864 in the house just north of this street. The college was named ‘Camden’ after Robert Bourne’s house which was named after the ship ‘Camden’ on which he came to the colony. Camden Ward was created in March 1886 because the population of Enmore Ward had doubled; see Campbell Street.

Campbell Street in O’Connell was named prior to 1865, but we do not know for whom it was named. John Campbell was a director of the Cemetery Trust, James Campbell was an Alderman and Mayor (according to Lilith Norman), Robert Campbell was one of the colony’s richest merchants and Warden at St Peters Church.

Campbell Street in Enmore can be seen on an 1841 subdivision map and was renamed as Camden Street in June 1865. Robert Campbell, one of the colony’s richest merchants and warden of St Peters Church, owned the land south of it in the 1840s.

Camperdown Road in O’Connell ward appears on the Samuel Lyon’s 1841 subdivision plan of the Camperdown Estate grant. It was renamed as Church Street in 1878. Both it and the original Missenden Road were very narrow streets; see Church Street.

Carillon Avenue in O’Connell was formerly Bligh Street and St. Paul’s Street. Lilith Norman suggests it was named to celebrate the War Memorial Carillon in the University quadrangle tower in the 1920s.

Cavendish Street in Enmore is first mentioned in 1865.

Cecil Street in Camden appears on an 1870s/1880s subdivision map (no N6/167 at the Mitchell Library) crossing Norfolk Street.

Chalder Street in O’Connell ward was given by Thomas Chalder to Council in 1878. Chalder also owned the Marrickville subdivision which gave its name to the suburb which grew up around it.

Chaplin Street in Enmore was not built. It appears on two undated subdivision maps (no N6/229 & 230 at the Mitchell Library) of the Thurnby Estate. The name refers to Thomas Chaplin Breillat 1803-1873 and wife Mary who owned Thurnby here. A merchant and philanthropist, he headed the Sydney Chamber of Commerce. According to the Australian Jewish Historical Society Journal (Vol.II Part IX 1948) he, like Emma Josephson who lived across the road, was descended from Huguenot Jews but converted to the Church of England and a memorial stained glass window at St Peter’s church commemorates his family.

Chard’s Lane was formed between Baltic, Oxford and Bedford Streets in Kingston in 1866. A Mr. Chard lived in Horbury Terrace/Bedford Street at this time, John Chard operated the Shakespeare Hotel on King Street, his surname can still be seen on an 1884 parapet on the main road between Brown and Whately Streets.

Charles Street in Kingston is named for Lieutenant-General Sir Maurice Charles O’Connell (d.1845) and was the southern boundary of the cemetery between Church and Australia Streets. It connected with Lennox Street in 1848; in 1879 the Charles section of the road was renamed as Lennox.

Charles Street in Enmore was formed before 1863, and its proximity to Augustus Street suggests it was named for Sir Charles Augustus Fitzroy, bon-vivant and NSW Governor 1846-56 (?). 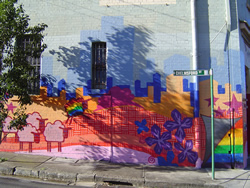 Chelmsford Street was formed prior to 1863 as Wellington Street. Frederic Napier was Lord Chelmsford and Governor from 1909 to 1913. He attended Newtown’s Golden Jubilee celebrations in 1912.

Chelsea Street in Enmore; following the renaming of a section of Cooks River Road as King Street, Alderman Melville proposed in October 1877 that Enmore Road be renamed Chelsea Street. This referred to ‘Chelsea Villa’ which stood at the time in Simmons Street near Sloane Street. However Alderman Cozens recommended Queen Street instead.

Church Street in O’Connell Ward was previously known as Camperdown Road. It was renamed this in 1878 as there were two churches here (St Stephens and the Baptists) and Newtown Council was engaged in continuing disagreement with Camperdown Council at this time over the drainage alignment of connecting streets and boundaries.

Clara Street in Enmore is shown on a subdivision map (no. N6/37-38 marked ‘1859’ at the Mitchell Library). It was named for the Joshua Josephson’s fifth child Clara Maude Stokes 1846-1897. It is first mentioned in Council minutes in the 1880s and extended to Camden Street in 1885.

College Street in Enmore Ward was formed as part of the 1877 subdivision of the Camden College garden; the college building itself was demolished in 1888.

College Street in O’Connell Ward appears on an early map close to St. Paul’s College but it seems to have been subsumed into the easterly extension of Campbell Street.

Colwell’s Lane which crosses Denison Street in Kingston is first mentioned in 1879. Edward Colwell worked as a Council carter for eight shillings and sixpence per ten-hour day in 1867, increasing to eleven shillings in 1880.

Commodore Street in Enmore was named in 1878 after the original owner’s brother Isaac Josephson (1824-1897) an enthusiastic sailor and co-founder of the Royal Sydney Yacht Squadron at Kirribilli in the 1850s.

Cooks River Road extended from Parramatta Road to Cooks River. It was previously known as Bulanaming Road until the 1820s and informally known as Newtown Road in the latter half of the 19th century. The section between Bligh Street and St. Peters Station was renamed as King Street in October 1877.

Copeland Avenue in O’Connell was formed sometime after 1880 and presumably when the Yarraville garden was subdivided in 1906. Henry Copeland 1839-1904, a mining expert, MLA for Newtown 1882-83, one-time Minister for Lands, Secretary for Public Works for 3 months in 1883, and Secretary for Lands four times between 1886 and 1894. He lived at ‘Yarraville’ between Wilson Street and the rail line in the 1870-80s where he would have had a view of the Eveleigh rail yards. He discussed drainage problems from Wilson Street with Council in 1879 (see Minutes of Newtown Council 21st February 1882). He also owned 14 lots on the eastern side of Burren, which he sold of in April 1900. Alan Sharpe says Copeland clashed with Henry Parkes on the issue of whether the National Art Gallery should open on Sunday.

Cozen’s Lane in Enmore was named for Alderman Richard Cozens in 1885.

Croft’s Lane in Camden is mentioned in 1879 crossing Norfolk Street near Fowler Reserve, and presumably named for William Croft who lived here and operated a hay and corn store shop on the Newtown Road in the 1860s.

Crescent Street in Enmore skirted the south side of the crescent-shaped rail line from the mid 1850s, but was resumed (ie, compulsorily acquired by the Government) to make way for the increased number of railway tracks.

Crook(s) Lane in O’Connell is a crooked lane running off Church Street (it has what appears to be a two-storey slab wood stable).

Cross Street runs across Metropolitan Road in Enmore and is first mentioned in August 1886.

Curtis’ Lane is mentioned in the Minutes of Newtown Council for 7th May 1878 but cannot now be located.