Bailey Street in Enmore was formerly Union Street West and was renamed for Mayor William Bailey in 1878.

Baltic Street in Kingston was formed prior to 1863, and was presumably named by members of the Bligh family in memory of an English naval campaign in the Napoleonic wars (their estate names also included a Copenhagen and Camperdown).

Barden’s Lane is mentioned in the 1882 Minutes of Newtown Municipal Council as being between London and Cambridge Streets in Enmore, but does not appear on later maps. It was named for Mr. E. Barden whose shop was on the Enmore Road/London Street corner and who lived in Cambridge Street at the time. The Barden family came from Sussex in the late 1840s and had a number of hotels in Newtown, Petersham and Tempe; they annoyed Councillor Curtis in October 1864 by leaving their horse and cart (where?)- he ‘thought an example should be made’ to exercise the Council bylaws. 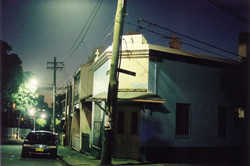 Bedford Street in O’Connell Ward was presumably formed soon after 1855, when the railway was built, and named after the alderman, landowner and baker David Bedford. It originally extended from Australia Street to ‘Station Street North’ until Council bought an area of land and extended Horbury Terrace to connect to it. It was suggested in the 1860s that the approach to the railway from the Kingston side be called North Station Street.

Belmore Street in Kingston is shown on subdivision map no N6/177 at the Mitchell Library, running between and parallel to Denison and Regent Streets. It was named for Somerset Richard, Earl of Belmore, Governor from 1868 to 1872.

Belmore Street was formed in Enmore in 1881 and named for Somerset Richard, Earl of Belmore, Governor from 1868 to 1872. The Countess of Belmore laid the foundation stone for St Stephen’s Church Camperdown on 3rd April 1871.

Bennett Street was formed in O’Connell after 1874, and may be named after Police Staff Sergeant Bennett who was posted to Newtown in 1863, or for Samuel Bennett. The latter Mr. Bennett was part-owner of the ‘Town & Country Journal’ and (with Henry Parkes) the ‘Empire’ newspaper. Until 1873 he lived in ‘Willow Lodge’ which still stands nearby off Wilson Street and is noted in a poem ‘By Cliffs and Sea’ by fellow-Newtownsman Henry Kendall. A subdivision map no N6/240 at Mitchell Library suggests a financial link between Samuel Bennett and Colonial Treasurer Sir Saul Samuels MLA.

Bennett Street was named in 1905, when it was officially recognised as a street in the Bennett’s Estate sub-division (DP4638). Prior to this it had existed as a private driveway providing access from Queen Street to “Rosebank”, a 2 storey “villa cottage” located at the rear of Lot N of the old Bligh Estate, fronting Wilson Street. The Bennett’s Estate land had been in the Bennett family for over 50 years. Samuel Bennett, had purchased Lot N, of just over an acre and a quarter, from Joseph Frey Josephson, Solicitor, on 9 September 1854 for £500. There were two 2-storey houses on it, “Rosebank”, at the North-West corner and “Willow Lodge”, which still stands, located closer to Wilson Street towards the South East corner. Bennett purchased the 2 smaller lots facing Queen Street some 20 years later. These purchases were probably made to provide separate access to “Rosebank” from Queen Street. Bennett, a Cornishman, was a compositor by trade and had come to the colony in 1841 as a Bounty Immigrant, under contract the proprietor of what was then the Sydney Herald. At the time of the purchase he was still employed at the Herald, supervising the Printing Department. In 1853, having established himself in the Colony, he sent to Cornwall for his now widowed mother and his three maiden sisters. They arrived in June 1854 and Bennett’s need for more space than his 2-storey semi-detached residence in Burke Street Woolloomooloo provided, prompted his purchase of the Newtown property. Bennett lived at “Rosebank”, which became 14-18 Bennett Street after the 1905 sub-division, “Willow Lodge”, at 206 Wilson Street, was probably occupied by his mother and her three daughters. See also the treatise on Samuel Bennett. in Memories.

Bishopsgate (or Bishopgate) Street was formed in O’Connell in 1863. The Council’s minutes spell it as Bishopgate after 1877.

Bligh Street in O’Connell was opened in 1865 and named for the estate’s former owner, Governor William Bligh. Previously it ended at Nelson Street with a ten-foot track called St. Paul’s Street linking St. Paul’s College (1855) and St. Stephen’s Church. Afterwards it was renamed as Carillon Avenue.

Boland’s Corner is the junction of Enmore, Edgeware and Stanmore Roads at Enmore. Patrick Boland owned the Warren View Hotel here in the 1870-80s.

Boundary Street at the western boundary of Kingston was first mentioned in the minutes of 1883 when ‘Moved by Alderman Peirce, “that 12 inch drainpipes with the necessary junctions etc. be laid in Boundary street from rade Street and Albert lane at a cost not exceeding £15”. Seconded by Alderman Neale and carried’ but it does not appear in any of the early maps of those years.

Bourke’s Lane is mentioned in 1884 but its whereabouts and the origin of the name is unknown.

Bourne’s Lane (or Bowen’s lane) in Enmore was renamed as Campbell Street some time prior to the 1860s. It was named after Robert Bourne, who owned the land north of it until selling to Thomas Holt in the 1850s; Robert Bourne was a missionary and on the Sydney College committee in 1844 with Blaxland, Lawson, W. C. Wentworth and Joshua Frey Josephson.

Brick Street in O’Connell was part of the 1845 subdivision of Governor William Bligh’s 210-acre Camperdown Estate grant; the area has been used by brickmakers since the 1830s. It was renamed as Victoria Street in 1878.

Briggs Street in Kingston; the paddock near St. Mary Street belonging to Mrs. Briggs was divided and sold on 21st March 1875, leading to a dispute about changing the boundary with Camperdown Municipality.

Brook’s Lane which runs parallel to Australia Street in Kingston ward, was presumably named in 1878 for J. W. Brooks, a local resident. It is spelt as Brooke’s Lane on the 1939 Lands Department map.

Brown Street in O’Connell ward was described as ‘newly opened’ in the Council minutes in early 1883. It ran from opposite Robey Street in Wilson Street to King Street. Robey Street was renamed on 3rd March 1885 when the following motion was moved:- ‘Moved by Alderman Whately, “that the name of Brown Street be substituted for that Street known as Robey Street”. It was named for Stephen Campbell Brown MLA (1829-1882), a resident in Newtown from the late 1850s who lived in ‘Leichhardt Lodge’ from 1867. Brown was solicitor to the Council from 1865, Chairman of the Cooks River Road Trustees, represented Newtown in the Legislative Assembly from December 1864 to November 1881 and was Postmaster-General from then until August 1882, then MLC (?). He was a member of the Church of England, and had 7 children from 2 wives. He was also Vice-President of the Sydney Philharmonia Society in 1865 and a handicapper with the Australian Jockey Club in the 1870s; he is mentioned in the poem ‘The Gagging Bill’ by Henry Kendall (who was resident in Enmore Road in 1867).

Brown’s Lane was mentioned in the minutes of 31st March 1885; see Brown Street.

Bruce Street in Enmore is really a lane running between Station Street and Reiby Street, first mentioned in 1874 and named for Alexander Bruce who owned the land in Station Street just south of Mary Reibey. He may have been a Chief Inspector of Stock (to be checked) and nominated for election to Newtown Council in 1877.

Bruce Street in O’Connell is indicated on the 1939 Lands Department map between Bucknell and Brown Streets.

Buckingham Street in O’Connell was formed prior to 1863 but does not appear on the 1939 Lands Department map.

Buckland Lane in O’Connell runs parallel on the east side of the main road. Thomas Buckland 1814-1896 was a lawyer for the Cooper Estate property at Waterloo flats, Director of the Bank of New South Wales and the Colonial Sugar Refining Company, and also a personal friend of fellow bank board-member Thomas Walker.

Bucknell Street in O’Connell is first mentioned in 1865 but it seems it did not then extend as far down as Wilson Street. Mrs. Catherine Wentworth Hill (nee Bucknell) offered 40 feet of land to enable its extension in 1877. William (and Martha) Bucknell purchased part of the Divine estate between Wilson Street and the railway and were affected by the 1848 land dispute with Bernard Rochford. In 1877 Council asked J. W. Watkin if the Permanent Building Society would give land in order to widen Bucknell Street but it replied asking for compensation to the extent of one-third of its value.

Bulanaming Road is the early name for Cooks River Road and is marked on Campbell’s copy of a 1789 map. Bulanaming was a name up until the 1820s for that area between Sydney and Cooks River and the Parish of Petersham.

Burren Street is not mentioned prior to 1880; an extension southwards was discussed in 1883 and made in 1886; Alderman George Brock planned an extension northwards to Yaralla Street in 1889. Nicholas Devine was Principal Superintendent of Convicts and received grants in 1794 and 1799 totalling 210 acres and called it Burrin Farm after his birthplace, though it has since been spelt Burren and Burran.